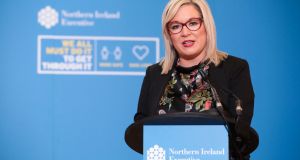 Northern Ireland’s Minister for Health warned on Friday that further restrictions to limit the spread of coronavirus could soon be necessary after more than 1,000 more people tested positive for the virus.

Figures released by the Northern Ireland Department of Health showed 1,080 new cases of the virus were identified in the 24 hours to Friday, the largest daily increase since the pandemic began.

Robin Swann said the situation was “grave and getting more so on a daily, if not hourly, basis” and he was advised that “further restrictions for Northern Ireland are likely to be required in the very near future, in the event of positive cases continuing their current upward trajectory”.

These, he said, would be “necessary to reduce hospitalisations and loss of life and to protect our health and social care system from being overwhelmed”.

In the last seven days, 5,272 new cases of the virus have been confirmed in the North, with the total number of cases rising to 18,190.

In Derry and Strabane, Co Tyrone, where restrictions similar to the Republic’s Level 3 were introduced on Monday in an attempt to curb the spread of the virus, the rate of infection over the last seven days has risen to 834 per 100,000 of population.

The North’s hospitals are now treating 132 patients with the virus, with 16 in intensive care.

No new virus-related fatalities were announced, leaving the total number of deaths recorded by the department at 587.

Meanwhile, Northern Ireland is to receive an additional £200 million (€220 million) from the UK treasury to help support businesses through coronavirus. The North will also benefit from the expansion of the UK’s job support scheme, which will pay two-thirds of the wages of employees at firms which are forced to close because of coronavirus restrictions.

Taoiseach Micheál Martin and Minister for Foreign Affairs Simon Coveney, as well as the North’s Ministers, had previously told the UK government additional financial backing was needed if Northern Ireland – which has limited fiscal powers – was to introduce further coronavirus measures.

This financial injection could pave the way for the restrictions in force in Derry and Strabane to be extended to other areas which are also experiencing significant numbers of cases, such as Belfast, Newry Mourne and Down and Mid-Ulster.

The chief medical officers from North and South spoke on Friday amid increasing concerns about the impact of the Border on infection rates.

Mr Coveney told RTÉ he hoped politicians from the Republic and Northern Ireland would come together to address this in the days ahead.

“We cannot have a situation where there is a significant disparity in terms of the pace of spread in one jurisdiction right next door to another . . . we do need a collective response here,” he said.

Meanwhile, the North’s Deputy First Minister Michelle O’Neill is self-isolating after a close family member tested positive for the virus.

The Sinn Féin vice president is being tested for the virus and will have to restrict her movements for two weeks and work remotely from her Co Tyrone home.

“Michelle will continue to follow the public health advice and carry out her duties in Government remotely,” a Sinn Féin spokesman said.

New figures show that four coronavirus deaths occurred in the latest week analysed by the Northern Ireland Statistics and Research Agency (Nisra), which reports with a one week lag. It put the North’s coronavirus death toll at the end of last week at 906.

The four deaths occurred in the week of September 26th to October 2nd. The comparative total number of deaths reported daily by the Department of Health stood at 583 on October 2nd.

The Nisra data gives a broader picture of coronavirus fatalities than the figures released on a daily basis by the department. The department’s statistics focus primarily on hospital deaths and only include people who have tested positive for the virus.

Nisra obtains its data from death certificates in which coronavirus is recorded as a factor by a medical professional, regardless of where the death took place. The person may or may not have tested positive for the virus.

The 364 deaths which occurred in care homes and hospices involved 85 separate establishments.

Care home residents make up about 48 per cent of all deaths linked to Covid-19 in Northern Ireland.