Cliff Taylor: Go out and spend your cash, it is your national duty 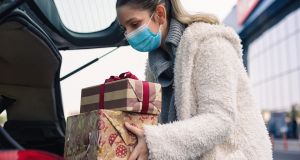 One of the key messages of Budget 2021 will be: go out and spend your cash, it is your national duty. Photograph: iStock

The job of Ministers Paschal Donohoe and Michael McGrath in presenting the budget just got more difficult. Ireland avoided a move to Level 5 this week, with all the economic cost that would entail, but this particular cat is now out of the bag. We all realise that it may happen. Building confidence that we can live with coronavirus and that the economy can get through this in some kind of reasonable shape just got trickier.

The route out of this is foggy and uncertain. We may need to lockdown to “save Christmas”, we are told. But there isn’t much point in saving Christmas if we destroy the economy. The key issue is not whether we can visit each other’s houses over the festive season, nice and all as that would be. It is whether we will have to throw a few hundred thousand people back out of work for the privilege of doing so. And even if we do, how do we know the virus won’t surge back? If we are going to have a proper debate about this, then focusing on what we can or can’t do for a few days in December is not a good place to start.

If the Government message last week really was 'not yet' on Level 5, then it must urgently reassess what has to close if we do need further restrictions

This fear of Level 5 has now entered the national consciousness. Crucially, the Government did not appear to say “not now, not ever” in response to the National Public Health Emergency Team’s plan – it was just “not now”. Events in the weeks ahead may build up fears, or ease them a bit. But the risk is now in the public and business consciousness.

Most economic forecasts, even the more pessimistic scenarios, were built on the possibility of some restrictions continuing into next year – but not a potentially lengthy national “circuit-breaker” shutdown. And this possibility now makes the budget much more difficult, for two reasons.

The first is the obvious one. The cost. The word is that senior officials have been looking over the last week at what the price might be of tougher restrictions and how the public finances might cope. The budget numbers may already have factored in Level 3, or short moves higher in some regions, but not a national move to Level 5. A key question is what mix of general and sector-specific supports would be required – and would be affordable.

Tánaiste Leo Varadkar has already hinted, for example, that the budget will contain something for sectors like events and travel which have been closed right through. Now the same may apply to hospitality, which had been edging back to a reopening but whose owners will now fear will have to stay largely closed through the winter, except for coffees and takeaways served through a hatch.

If the Government message last week really was “not yet” on Level 5, then it must urgently reassess what has to close if we do need further restrictions. It is a vital time of year for retailers, for example. As things stand all non-food retail would close under Level 4. So would construction, parts of manufacturing and the leisure sector. Having survived the first closure hit, many would not get through a second.

A key question is whether this is necessary – we must presume the public health authorities have some data on where outbreaks have been, as well as access to international experience. And the updated national plan now allows for “designated workers” to stay in employment – though it does not say who they might be. We urgently need clarity on this.

For recovery to take hold, consumers have to be tempted to spend a bit more as we move into next year

Donohoe and McGrath, with the benefit of decent tax revenue and cheap borrowing, can probably plan a way through this in terms of the budget deficit for the rest of this year and next. This week the National Treasury Management Agency borrowed long-term cash at negative interest rates. The hope is that by, say, the spring of next year we will at least see a way out of the crisis, even if we are not quite there yet. But we just don’t know.

But the Ministers will also be conscious of the pernicious impact of this on confidence. Fear of a lockdown is not as bad as the event, but it will have an impact. Already there is quiet talk of some projects being put on hold and some investments canned. This is risky as it is one way for the recession to spread its tentacles more widely.

The other way is for consumers – those with money – not to spend it. And some people do have money, with wages increasing in more successful sectors and a €350 million cost next year of meeting the terms of the expiring pay deal for public servants. A further lockdown makes cash hoarding more likely, for the obvious reason that some of the places they might spend cash will be shut. But somehow, for recovery to take hold, consumers have to be tempted to spend a bit more as we move into next year. Savings accounts are bulging, with not far off €10 billion in additional savings early in 2020. One in every three euro is being saved – normally it would be one in six or seven.

A real conundrum for the budget will be how to get people to spend more. Buy a car would be one way, but VRT changes will make diesel and petrol cars more expensive. Despite massive subsidies of about €10,000, take-up of electric cars will take time to build. People may be encouraged to retrofit their home, but this is expensive and disruptive work.The staycation tax relief now looks like a waste of time in the light of the travel and dining restrictions. And the cut in the VAT rate from 23 per cent to 21 per cent in the July stimulus was misguided and expensive.

Nonetheless, one of the key messages of Budget 2021 will be: go out and spend your cash, it is your national duty.

1 Cork shootings: ‘Devastation was impossible to imagine’, funeral hears
2 Strong earthquake with a magnitude of up to 7 hits Turkey and Greece
3 Storm Aiden prompts nationwide weather alerts for Halloween
4 US election: ‘Trump would not be caught dead here unless he wanted our votes’
5 First full moon on Halloween night since 1955 will be rare ‘blue moon’
Real news has value SUBSCRIBE