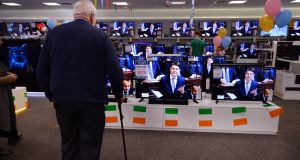 Will pensioners get their customary €5 in the budget?

Paschal Donohoe and Michael McGrath surely have their work cut out on Tuesday when Budget 2021 is unveiled. With one hand Covid-19 has to be fended off while the other deals with Brexit.

One would be bad enough but both are most definitely in double whammy territory. And, lest we forget, there is the housing crisis.

With Government spending currently running about €16 billion ahead of this year’s already revised estimates and money being thrown around like snuff at a wake, they have precious little left of what was once termed headroom.

So what do we know so far about what is likely to happen?

The Minister for Finance set out his stall when it comes to income tax when he said categorically there would be no rise. The unspoken other side of the equation is that there will be no cuts either. He doth not giveth nor taketh away.

And what of USC, the cornerstone of the Fine Gael manifesto in the election before last?

Cuts were promised, and some grazes were delivered, but that was back in the pre-Covid days and when we still had time to negotiate a post-Brexit trade agreement with Britain. In these straitened times the best that can be hoped for here is a tweak.

The same can be said for PRSI. Possibly a tweak here and there, possibly not.

When it comes to social welfare the big kahuna is the State pension. It has become almost customary for it to get €5 on budget day. This year could very well be the exception.

As talks continued over the weekend Government sources said there was unlikely to be any great, late surprises on tax.

The other question on people’s lips is whether the Christmas bonus will be paid. No commitment has been made either way. However, even if the numbers in receipt of social welfare are as horrendous as they were in the spring, it would be politically difficult not to pay it.

All other social welfare rates will probably be untouched with the possible exception of the carers support grant.

Reports indicate the carers grant will increase by €150 next year, while discussions continued on Monday in relation to the social welfare Christmas bonus.

Alas, no budget would be complete without the old reliables of smokes, booze and fuel. A rise in the price in cigarettes and other tobacco products is nailed on. Probably the only thing that is in Budget 2021.

With the Greens in Government and our climate change commitments it is hard to see diesel escaping this year.

However, a rise in diesel was touted last year as one of the low hanging fruit and nothing happened. With carbon tax rises pencilled in for next year, now might be the time for Donohoe to start equalising the cost of diesel and petrol.

In a win for the Greens it is anticipated there will be changes to how cars are taxed, with VRT rates lowered for new electric cars and low-emission petrol cars.

There will also be an increase in funding for the direct provision system, to improve existing accommodation conditions for asylum seekers, and finance awaited recommendations for reform of the system.

Tusla, the child and family agency, is expected to receive a budget bump of close to €50 million, and an additional €100 million is to be provided across the disability budget.

Alcohol, with the hospitality sector on its knees, will more than likely remain untouched.

When it comes to housing, it is likely that the Help to Buy scheme will be extended. However, it has been suggested by the Tax Strategy group that stamp duty, untouched since 2010, should be looked at.

There is also likely to be a pot of €500 million for new social housing projects, lest that crisis be entirely overshadowed by the ongoing pandemic.

For a huge swathe of the population working from home was once a nice occupation. This has changed utterly and people are beginning to look at out-of-pocket expenses, especially as the cold day and long nights of winter draw in. Some positive noises have been made about the situation but it remains to be seen if some tangible difference will be deliver on the day in the form of tax reliefs.

One of the bumper announcements expected is a stimulus fund worth up to €5 billion to support the economy in the fallout of Covid-19 and Brexit.

Dubbed a “super-fund” by one Government source, the financial package will support businesses and industries hit by the pandemic, as well as those expected to lose out as the effects of Brexit bite next year.

A separate compensation scheme for businesses required to close under Covid-19 restrictions in the event of a Level 4 or 5 lockdown will also be announced, with weekly or monthly payments to assist them to stay afloat.

It is expected the VAT rate for the hospitality sector will be cut from 13.5 per cent to nine per cent, as done during the last financial crash, in a boost for the struggling industry.

Anticipated changes to the Pandemic Unemployment Payment will allow self-employed workers earn a certain amount and still qualify for the Covid-19 payment.

Often the hungriest child at the table, this year the health budget is to see significant increases in spending to meet the ongoing cost of dealing with Covid-19.

There will be about €1.6 billion allocated for new developments including additional beds and staff, as well new funding for mental health. There will also be additional funding for home care packages to keep people out of hospitals.

The HSE said at the weekend it was looking at the provision of about 20 additional ICU beds next year, and 125 more in 2022 to bring the total up to about 450.

Included in the new health budget will be about €1.3 billion to pay for testing and tracing for Covid- 19 and to meet the cost of procuring personal protective equipment.

1 Pilita Clark: Managing ‘meeting monsters’ to get work done
2 Chris Johns: Economies may enjoy ‘roaring twenties’
3 Covid-19 weighs on law firms as two in three see revenue drop
4 Arcadia on the brink of becoming biggest retail casualty of pandemic
5 Hospitality sector may take four years to recover - Supermac’s
6 Basic income for all: Has the Covid crisis given us a new economic model?
7 ‘They’re not making any more land, so it will be valuable’
8 Irish early-stage start-ups suffering funding crisis
9 Unilever’s Dutch and British arms merge after 90 years ahead of Brexit
10 Profits jump threefold at LinkedIn’s Irish unit to $294.2m
Real news has value SUBSCRIBE