Covid-19 State borrowing is being countered by private savings

John FitzGerald: By late 2021, excess savings will hit €20bn or 20% of total consumption 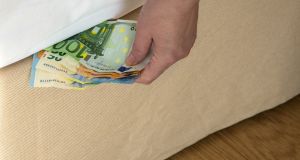 The worst-case scenario, where a vaccine does not become available next year, has not been considered. This would have very serious implications for public health policy and the economy.

This week, the Central Bank and the Economic and Social Research Institute published their latest economic forecasts. They follow hot on the heels of the Department of Finance’s forecast late last month.

They all suggest that the economy has performed significantly better this year than had been expected six months ago when the economy and society were in lockdown. However, they all also consider how the future might be more difficult due to Covid and Brexit.

The reason for the superior performance this year is that a substantial part of the economy was unaffected by the crisis, with production continuing, either in factories or by people working from home. Ireland is unusual in the importance of services exports and some of those exports, like IT services, are eminently suitable for home working, at least for a period.

They are also high-value activities in terms of wages and taxes. In addition, further relocation of multinational enterprise activity to Ireland will see an increase in corporation tax revenue, directly augmenting national income.

However, that is where the good news ends. The continuing challenge posed by Covid will mean that significant parts of the economy will continue to be closed or working to very limited capacity due to the risk of infection. Also, these sectors – such as arts, entertainment and hospitality – are employment-intensive.

Thus, unemployment will be higher in the second half of the year than anticipated, and will continue at a high level next year.

Earlier in the year the expectation had been that a vaccine would see the crisis easing in the first half of next year. Realistically, it looks like being the second half of 2021.

That would mean that the public health measures are likely to remain in place in some form for another year. In turn this means that pubs, restaurants, theatres and cinemas all face a further dismal period.

The surprising strength of part of the economy means that the deficit this year will be lower than anticipated in April. As a result, the Government is in a good position to provide significant further protection for households and firms suffering special difficulties.

In designing support for business, the Government should not be distracted by those who shout the loudest. While pubs have real problems, which need financial support, there are other less vociferous sectors, such as arts and entertainment, who are, if anything, worse affected.

Other badly affected sectors are public transport, including aviation, and third-level colleges, which are expected suddenly to take in many more students while their funding model is shot to ribbons.

The support for business should target those most in need rather than general schemes, such as a cut in VAT, that would give money to many businesses which don’t have problems.

In the case of the arts and entertainment sector, the problem is not just one of supporting venues. Reopening a theatre building will be easy. Putting together an artistic programme will be much more difficult, especially if the artists are scattered to the four winds.

If a vaccine is developed so that it can be widely deployed in the second half of next year, this would allow those parts of the economy which are in the deep freeze today to fully thaw out in 2022.

However, the worst-case scenario, where a vaccine does not become available next year, has not been considered. Such an outcome would have very serious implications for both public health policy and the economy. Already the population across Europe is beginning to suffer from social distancing exhaustion.

The Department of Finance first pointed out in April that, while the Government is borrowing large sums, households, on aggregate, are saving like mad because they can’t spend their money on holidays, eating out or entertainment. The latest CSO data shows that in the first half of the year households saved an extra €9 billion, exactly matching the Government dissaving of €9 billion.

The Department of Finance’s forecast highlights that these growing savings are being held mainly as bank deposits – easily spent if circumstances change. Their forecast also suggests that by the end of next year excess savings will amount to €20 billion, 20 per cent of total consumption.

If a vaccine is found next year and we all feel safe again in 2022, this would fund one hell of a party. If and when we spend these excess savings, up to 40 per cent will come back to the Government in taxes. This should provide a reassuring backdrop for the Minister in preparing the budget.