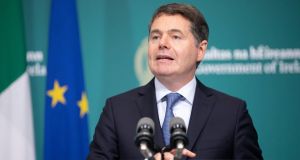 The Cabinet has approved the drawdown of €1.5 billion from the State’s so-called rainy day fund for Budget 2021.

The emergency fund was established only last year with a €1.5 billion transfer from the Ireland Strategic Investment Fund (ISIF) but plans to put an additional €500 million in it each year were shelved because of Brexit.

Minister for Finance Paschal Donohoe said the proceeds were needed “to mitigate the exceptional circumstances arising from Covid-19”.

He said the requirements for accessing the fund had been met and it was “appropriate” to use the resources to help fund Budget 2021.

The drawndown requires the approval of Dáil Éireann and Mr Donohoe said it was his intention to introduce a motion to allow him access the fund on Budget Day next week.

“ We are in exceptional times. The fact that our public finances were so carefully managed in recent years put us in a good position and allowed us to provide for such contingencies,” he said.

“ It is appropriate now that we release the funds that are at our disposal, as we work to meet the needs of our people, support businesses and strive towards stabilising our economy once again,” Mr Donohoe said.

The previous Fine Gael-led govermment first mooted the idea of a so-called rainy day fund in 2016 as a buffer against future shocks. The plan was use it to save budgetary surpluses or excess revenue from corporation tax.

Originally the government promised to set aside €1 billion every year, starting in 2019, but this was later revised down to €500 million and then deferred altogether because of Brexit.