First episode of The Late Late Show aired on the 5th of July, 1962 with Byrne as its host 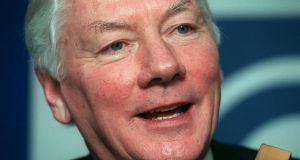 The broadcaster Gay Byrne has died at the age of 85 after a long period of ill-health.

He died at his home in Dublin on Monday, surrounded by members of his family.

Born in Dublin in August 1934, Byrne was a totemic and beloved figure in Irish broadcasting with a career that spanned six decades. For millions of people he was the face of RTÉ and a kind, reassuring voice every morning.

The first episode of The Late Late Show aired on July 5th, 1962 with Byrne as its host.

It was supposedly to run for just six weeks, but under Byrne’s stewardship the programme became an Irish cultural institution and, eventually, the second longest-running late-night talk show in the world.

With its magazine format it became, not just a platform for celebrity interviews and musical performances but a place where the most controversial issues in Irish life could be discussed.

His morning radio programme, The Gay Byrne Show, ran from 1973 until 1998 and was the first show on Irish radio to allow listeners to call in and set the agenda. In the wake of Ann Lovett’s death in 1984, the programme provided a forum for hundreds of letters from women outlining their own stories of unwanted pregnancy.

In both programmes, Byrne helped to expose social hypocrisy and to document a liberalising Ireland, often to the great annoyance of conservative politicians and clergy.

His decision to depart The Late Late Show in 1999 was not a complete retirement. He went on to present the quiz show Who Wants to Be a Millionaire?, the interview series The Meaning of Life and a weekly music show on Lyric FM.

He also took on a very different public role as the chairman of the Road Safety Authority where he became an important life-saving advocate for behavioural change on the roads.

In June, Byrne was due to receive the Ireland-US council’s Lifetime Achievement Award but was unable to attend the ceremony.

President Michael D Higgins paid tribute to him at the event, saying: “Controversial, outspoken, and unafraid to break new ground, it has been said that, throughout his many decades on television and radio, Gay Byrne’s role in the shaping and crafting of modern-day Ireland has been profound.”

He is survived by his wife Kathleen Watkins and their daughters Suzy and Crona.

RTÉ has announced it will broadcast a special Late Late Show on Tuesday night to pay tribute to Gay Byrne. Contributors to the 90-minute programme will include Bob Geldof and former President Mary McAleese. The show will air at 9.35pm on RTÉ One.