Admiral William Brown to be honoured by Mayo schoolchildren 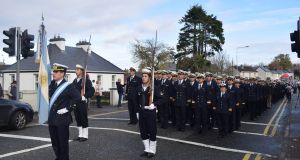 Foxford, County Mayo: Members of the Argentine navy walk in the footsteps of Admiral William Brown who was born in the town in 1777. Photograph: Oliver Murphy

National schoolchildren from Foxford, Co Mayo, will visit an Argentine naval ship as part of celebrations to remember the founder of the country’s navy.

The Libertad, one of the largest tall ships in the world, is berthed at St John Rogerson’s Quay in Dublin. Used as a training ship by the Argentine navy, it arrived on Saturday and will leave for Boston on Tuesday night.

The pupils will attend on Tuesday morning as part of celebrations to honour Admiral William Brown who was born in Foxford in 1777.

After living in continental Europe and the United States, he emigrated to South America in 1809.

Admiral Brown became the first commander-in-chief of the Argentine navy during the country’s struggle for independence between 1810 and 1818. The navy defeated Spanish, Brazilian and Uruguayan forces.

In 1847 he paid a visit to Ireland during the Great Famine in the company of his daughter and was shocked by what he saw.

He made a substantial donation for famine relief.

He died in 1857 and was buried in Recoletta Cemetery. In his eulogy Gen Bartolomé Mitre, who later became the president of Argentina, said that “Brown standing on the quarter deck of his ship, was worth a fleet to us”.

Argentina honoured Admiral Brown when 200 members of its navy who are members of the crew of the Libertad marched through Foxford on Sunday.

The Argentine ambassador to Ireland, Laura Bernal, laid a wreath at the Brown memorial in the town.

It was the largest representation of Argentine people in Foxford since the centenary of the admiral’s death 1957.

Foxford was festooned with the green and red balloons of Mayo and the blue and white balloons of Argentina.

The event was organised by the Mayo-based Admiral Brown Society. Spokesman Oliver Murphy said the Argentine visitors were “overwhelmed with the warmth of the reception” they got in Foxford and their presence cemented relations between Ireland and the country which has the largest Irish diaspora outside the English-speaking world.