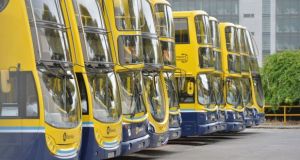 The NBRU said anti-social behaviour directed at staff in Dublin Bus and Bus Éireann was becoming so frequent that drivers were no longer reporting all incidents.

Minister for Transport Shane Ross has failed public transport workers “dismally” by not taking adequate steps to ensure people’s safety or following up on his 2017 commitment to hold a forum around transport policies, the head of the National Bus and Rail Union (NBRU) has said.

Dermot O’Leary said on Monday that he had written to both Mr Ross and Minister for Justice Charlie Flanagan to request that they do “what’s right by frontline transport workers” and increase Garda resources to build a safer public transport infrastructure.

His comments follow a spate of Halloween night attacks on buses around the country which included one incident where a female driver in Cork was threatened with rape and had to lock herself in the cab of the bus as youths kicked on the door.

Mr O’Leary, general secretary of the NBRU, said the Minister for Transport needed to follow up on his promise in 2017 that a new stakeholder forum would be established to give transport companies and people using their services a chance to have an input in Government policy. Mr Ross committed at the time to setting up the forum once industrial issues were fully resolved.

“He said if there was no industrial relations problems pending he’d set the forum up,” Mr O’Leary said. “He promised us a public transport stakeholder forum, where gardaí and community groups would gather, examining issues around policy and funding but also this issue of safety.

“He’s failed us dismally... frontline workers are suffering assaults. I’m asking the minister for transport what he’s doing to stop this behaviour.”

Mr O’Leary said Antoinette Cunningham, deputy general secretary of the Association of Garda Sergeants and Inspectors, has recently expressed support for the NBRU call that a Garda public transport unit to be established. However, in order to provide this support, gardaí need more resources, he added.

He also warned that the withdrawal and curtailment of certain bus routes had become “inevitable” given the rise in attacks on public transport workers. While Halloween saw a spike in attacks, abuse towards workers has become a regular occurrence, he said.

“We have enough information to identify habitual offenders in terms of routes. Our call for a Garda public transport division is something we’ll keep pressure on. There needs to be a conversation around this.”

Mr O’Leary warned at the weekend that anti-social behaviour directed at staff in both Dublin Bus and Bus Éireann was becoming so frequent that drivers were no longer reporting all incidents. The spate of attacks on Dublin Bus workers in the capital, and Bus Éireann workers in Cork, Meath and Limerick as well as earlier incidents in Waterford, Wexford, Donegal and Athlone, led in many cases to the curtailment of services, said the NBRU general secretary.