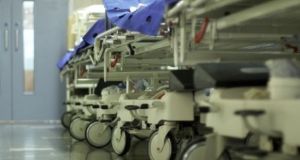 The INMO said the numbers on trolleys in October was the second highest monthly figure since it began its daily assessment of the issue.

There are almost 600 people, deemed to require admission to a hospital, waiting on trolleys in emergency departments or on wards on Monday, nurses have said.

Overall the INMO said there were 595 patients deemed by doctors to need admission waiting for beds in hospitals across the country on Monday.

The INMO said there were 44 patients waiting fora bed at University Hospital Waterford.

The INMO said there were not enough beds for the 11,452 patients in Irish hospitals who had to spend time on trolleys in emergency departments or on wards in October.

The INMO said the numbers on trolleys in October was the second highest monthly figure since it began its daily assessment of the issue. It said the highest month on record was January 2018 at 12,395.