Cocaine worth €44,000 seized during searches in Co Mayo 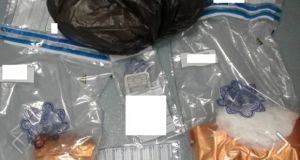 Some of the items seized by gardaí during searches in Co Mayo. Photograph: An Garda Síochána

Cocaine worth €44,000 has been seized during two Garda searches in Co Mayo.

The searches were carried out at two houses in the Westport area on Friday and Saturday by gardaí from the Mayo Drugs Unit and Westport Garda station, as part of ongoing investigations into the sale and supply of drugs in the county.

During the first search, gardaí recovered cocaine with an estimated value of €42,000, as well as mixing agent and a quantity of MDMA worth an estimated €100.

In the second search, cocaine with an estimated value of €2,000, herbal cannabis worth €2,500 and mixing agent were found.

A man aged 21 and an 18-year-old woman were arrested on foot of the operations on suspicion of offences under the Misuse of Drugs Acts. They were taken to Westport Garda station but have since been released without charge. Files are to be prepared for the DPP.

More than 63,000 end claims for Covid unemployment payment 13:14
Belfast Council apologises to families unable to attend cremation of loved ones 12:43
‘We are worried’: Taoiseach warns plan to reopen all pubs on July 20th may be delayed 12:25
Minister for Children rejects ‘ridiculous’ online claims over paedophilia 11:34
Covid-19: Vintners call for gardaí to stop ‘shocking’ street drinking 11:20

1 Minister for Children rejects ‘ridiculous’ online claims over paedophilia
2 ‘We are worried’: Taoiseach warns plan to reopen all pubs on July 20th may be delayed
3 Leaving Cert student told he is not eligible for predicted grade
4 Covid-19: Tragedy of ‘terrible dimensions’ as woman loses husband and son
5 Call for inquiry into death of Meath nursing home resident
Real news has value SUBSCRIBE