Brexit to hit parcel post to and from Britain 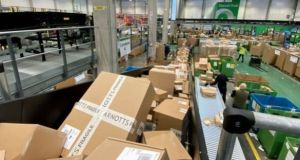 Parcels being sorted by An Post. File photograph: Bryan O’Bryan

One of the first ways Brexit will impact Irish consumers on New Year’s Day will be the addition of significant volumes of red tape and form filling, as well as higher charges, when sending and receiving parcels to and from Britain.

But Brexit will have no impact on letters to and from Britain, or on any goods and parcels to or from Northern Ireland.

For the almost five decades the UK was a member of the EU, the movement of parcel post between the two jurisdictions was seamless with few, if any, customs obstacles.

Things will change as of Friday and customs forms will have to be completed by anyone looking to send a parcel to Britain, An Post has confirmed.

Hundreds of thousands of parcels coming into the Republic will also require additional form-filling with charges applied before deliveries can be completed, despite the Withdrawal Agreement reached on Christmas Eve.

An Post said the form-filling exercises will apply to goods travelling to and from Britain with electronic customs data required for each item before posting.

While the steps may be new for consumers, An Post is already familiar with the processes required as it handles over 10 million parcels annually from non-EU countries, all of which have to be available for Irish customs officials to inspect.

The 16 million parcels An Post receives annually from Britain will join the stream of parcels presented to Customs.

There is, however, unlikely to be a need for delivery companies to levy charges directly on a significant percentage of home deliveries, as it is planned that 95 per cent of UK retailers for whom An Post delivers will add any VAT or customs charges at the online checkout.

That means Irish consumers will not have to fill out customs forms to receive their online purchases. The remaining 5 per cent - amounting to 800,000 parcels - will require consumers to pay additional charges in advance of delivery.

Parcels will not be released by An Post - or any of the leading delivery companies - until payments are received.

Irish residents or businesses sending parcels to the UK will be required to complete an online customs declaration forms.

Customs charges will not apply if the item is a gift with a value of under €45.

A spokesman for An Post said items bought from British sellers before January 1st but not delivered before the transition period ends are likely to be marked as exempt from new charges.