The organisers of an illegal rave that caused extensive damage to Lisa Wilkinson's Co Laois house are planning another event in Dublin for New Year’s Eve. 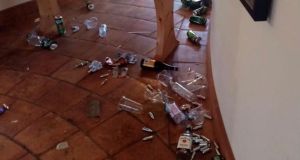 Photos taken after an illegal rave attended by more than 80 people in a house in Co Laois. Photo: Lisa Wilkinson

An Garda Síochána has confirmed it is investigating an illegal rave which caused extensive damage to a rented Co Laois house, over breaches of public health restrictions and criminal damage.

More than 80 people are believed to have attended the rave, with videos from the event, seen by The Irish Times, showing people dancing together with no face masks or social distancing.

The owner of the home was unaware of the rave, which took place on December 12th, and found the property “absolutely destroyed” afterwards.

A Garda spokeswoman confirmed gardaí in Portlaoise were investigating an “incident of criminal damage and alleged breaches of the Health Act 1947.”

“A rented property is believed to have been used to host a large gathering of people. A significant amount of criminal damage was caused to the property, which was discovered by the owners on inspection of the property,” she said.

Under temporary Covid-19 laws it is an offence to organise an event in breach of public health restrictions on gatherings, with fines ranging from €500 up to €2,500, or six months in prison on conviction.

The owner of the property had rented it via Airbnb to an individual claiming he wished to rent the house for a weekend hiking trip with work colleagues.

Lisa Wilkinson, whose partner owns the home, said the property was “absolutely destroyed” after the rave.

She said the inside of the home was littered with empty beer cans and bottles, used nitrous oxide ‘laughing gas’ canisters, and other rubbish strewn across the floors.

A number of mostly empty bags, which appeared to have been used to carry other drugs, such as cocaine and ecstasy pills, were also found amid the mess.

The group behind the rave organised the Co Laois event via a private Instagram and Snapchat social media account.

The group had also advertised tickets for a rave in Dublin on New Year’s Eve, in further breach of Level 5 public health restrictions.

In a post on a private Instagram page last week, the group began selling €35 tickets to a rave in a Dublin “warehouse”, with techno and house DJs and a “fully stocked bar”. However, on Wednesday the post advertising the Dublin event had been deleted.

People can only view the posts, or message the accounts, after requesting to follow the private account and being approved.

People buy tickets through an online link and after providing proof of purchase are added into a WhatsApp group chat.

For the rave in Co Laois the organisers informed people an initial pick-up spot would be provided in the group chat, and from there attendees would be transported via coach to the location, which was not disclosed beforehand.