Breege Quinn, the mother of a man murdered close to the Border 13 years ago, has again called on Sinn Féin Minister Conor Murphy to say “the simple words, that Paul Quinn was not a criminal”. 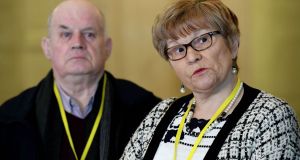 Breege Quinn, the mother of a man murdered close to the Border 13 years ago, has again called on Sinn Féin Minister Conor Murphy to say “the simple words, that Paul Quinn was not a criminal”.

Mrs Quinn also said Mr Murphy “must also go to the Garda and PSNI and give the names of the IRA men he spoke to in Cullyhanna. ”

Mrs Quinn travelled from south Armagh to Stormont yesterday morning to continue her campaign to try to get justice for her son Paul who was murdered in Co Monaghan close to the Border 13 years ago.

The 21-year-old from Cullyhanna in Co Armagh was lured to a barn at Tullycoora, near Oram in Co Monaghan in October 2007. A group of about 10 men fatally assaulted him with iron and nail-studded bars to such an extent that every major bone in his body was broken. The family blamed the IRA for the murder.

During the general election campaign the issue was again raised, with Paul Quinn’s parents, Breege and Stephen in particular complaining about how in 2007, Murphy – the current Sinn Féin finance minister – claimed that Paul was involved in criminality.

Conor Murphy does not have a mandate to criminalize the people he is supposed to represent.

He does not have a mandate to call our son a criminal.

We are once again calling on him today to say the simple words, that Paul Quinn was not a criminal.

Mrs Quinn said that Mr Murphy did not have a “mandate to call our son a criminal”.

“It should not be okay for any elected representative to call anyone a criminal and be rewarded with ministerial office time and time again,” she added in the great hall of Parliament Buildings, flanked by her husband Stephen and SDLP Assembly member for Newry and Armagh, Justin McNulty.

Ms Quinn said they would be meeting politicians during the day to press for support for her family’s justice campaign. She would, however, not be meeting Sinn Féin.

“I hope they listen,” she said. “I hope Conor Murphy is listening so that we can move our attention back to the men who killed our Paul and who are walking freely around Cullyhanna and Crossmaglen while our son is in the ground.”

Just ahead of election polling day, Mr Murphy “unreservedly” withdrew and apologised for his 2007 remarks but Mrs Quinn said he did not go far enough. She wanted him to bluntly say he was not a criminal and to give information to the Garda and PSNI about IRA members he spoke to in 2007. At that time Mr Murphy said he was told the IRA was not involved.

Asked about Ms Quinn’s comments by reporters in Dublin yesteday , Sinn Féin president Mary Lou McDonald said: “I would like her and Conor Murphy to sit down and talk in the first instance. I wish her peace of mind, above all, I wish her justice because those that carried out this brutal murder are still at large.

“I know that Breege has made her statement. I hear that, and I think our next move has to be to actually sit down, face to face to discuss these matters,” she said.

The Sinn Féin Deputy First Minister Michelle O’Neill also was pressed on the issue in the Northern Assembly by Traditional Unionist Voice leader Jim Allister. She said Mr Murphy had “unreservedly condemned” the murder and withdrawn his original comments, and that his apology was “heartfelt and sincere”. “The best place and the best way for this to be dealt with is on a one-to-one basis and Conor Murphy is very happy to meet with Breege Quinn,” she said.

. She indicated she could barely begin to understand how Breege Quinn could deal with such trauma. “We are talking about a mother – I am a mother,” she said.

She also rejected a suggestion by Ulster Unionist Party leader Steve Aiken that Mr Murphy was in breach of his ministerial code and should stand down. Ms O’Neill said that Mr Murphy previously spoke to the PSNI and Gardai about the murder and “he has called on anyone who has information to bring it forward”.