Valentine’s Day campaign seeks to highlight ‘darker side of relationships’ 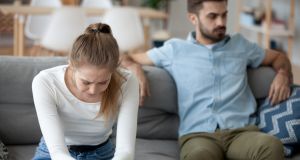 Thirty-nine per cent of women aged 18-29 in Ireland have experienced abuse by a boyfriend or partner. Photograph: iStock

Women’s Aid is marking Valentine’s Day 2020 by launching a campaign to raise awareness of the “darker side of relationships” and urging women in abusive partnerships to seek help.

The #TooIntoYou national campaign, which runs from Thursday for three weeks until International Women’s Day on March 8th, seeks to provide information on how to combat online stalking and digital abuse and will also see the launch of a new Women’s Aid instant messaging service to provide online support for those in need.

The campaign is also calling on younger women to keep their eyes open for the “ten key danger signs of dating abuse” which include controlling and possessive behaviour, accusations of cheating and erratic behaviour over texting or disagreements.

Women’s Aid is also hoping to raise awareness of the new domestic violence legislation that makes coercive control – a pattern of intimidation or humiliation involving psychological or emotional abuse – an offence.

The charity said it had found many young women were still unaware of the legislative change or how to go about getting protection and support.

Research highlighted by the campaign reveals 39 per cent of women aged 18-29 in Ireland have experienced abuse by a boyfriend or partner, while one in four women in Ireland experience physical and sexual abuse.

It also underlines that one in every two women aged between 18-25 and killed in Ireland since 1996 were murdered by their boyfriend or exes.

Chief executive of the charity Sarah Benson said that launching on Valentine’s Day, the campaign hoped to highlight the “hidden reality of many young women’s relationships at a time traditionally associated with love, romance and celebration”.

“In contrast to typically ‘softer’ Valentine’s messages, our hope is that in calling attention to the darker side of relationships at this time that the campaign will have a high impact,” said Ms Benson. “We are asking – what part of love is abuse?”

Ms Benson called on women who feel that “something isn’t right” with their relationship to seek help.

“Your partner does not have the right to control and abuse you. You should not have to worry about how he will react to what you do. Dating abuse is wrong and no one deserves to be threatened, beaten or be in fear for their safety.”

Any person seeking advice on this issue can access the Women’s Aid online chat service between 7pm-10pm Monday, Wednesday and Friday at www.toointoyou.ie or contact the Women’s Aid 24hr National Freephone Helpline 1800 341 900 which is available 7 days a week