Senator gets nod despite ‘autism’ controversy, as ex-TDs seek election to Upper House 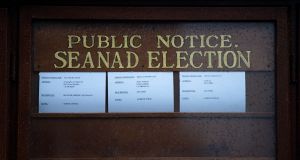 Fine Gael Senator Catherine Noone who became embroiled in controversy after comments she made about the Taoiseach, has secured a nomination to run again for the Upper House.

Ms Noone had described Leo Varadkar as “autistic” during her general election campaign run in Dublin Bay North but subsequently apologised. The Taoiseach said that while her comments were ignorant it was not proportionate for her to lose her job.

She confirmed on Sunday that she had secured the nomination from the Irish Country House and Restaurants Association to contest the election in what is a highly competitive race.

Candidates can run for election to one of five vocational panels by either getting a nomination from one of 110 civic society nominating organisations, or by getting the support of four Oireachtas members.

The postal election takes place between March 16th and 30th with nominations from civic society groups closing on February 24th and on March 2nd for Oireachtas nominations.

Ms Noone is among a growing number of Dáil candidates, former TDs and high-profile Ministers being considered as contestants for the 43 seats decided on by the outgoing Seanad, incoming Dáil and local authority councillors, a total electorate of about 1,200.

Party leader Eamon Ryan said the 15-member party executive, or ardchomhairle, will interview each of the 13 candidates on Wednesday for the three nominations.

The Labour Party has opened nominations for a week to pick four candidates and hopes that a majority will be female. Cllr Marie Sherlock has received a nomination from Siptu but has yet to be ratified by the party whose other candidates include Kildare South candidate Cllr Mark Wall and Dublin South Central candidate Cllr Rebecca Moynihan.

Other high-profile Fine Gael names being mentioned for the 43 seats decided by the Oireachtas and councillors are Minister of State Michael D’Arcy, former Dublin Bay South TD Kate O’Connell and former TD Áine Collins, who lost her seat in 2016.

Former Roscommon-Galway TD Eugene Murphy is seeking a nomination, while his general election running mate Orla Leyden is expected to receive a nomination after confirmation that her father, veteran Senator Terry Leydon, is standing down.

The incoming taoiseach gets to select 11 Senators and the remaining six are determined by graduates of NUI universities and Trinity College Dublin.

Volunteers use online forum to mind children of healthcare workers 15:53
Coronavirus: ‘Last time I saw her was when she was put into the ambulance’ 15:51
Coronavirus: Man who allegedly spat at garda brought to court by gardaí in protective gear 15:44
Irish flight bringing PPE from China arrives in Dublin 15:29
Coronavirus: HSE braces for possible peak of Covid-19 cases in mid-April 14:50