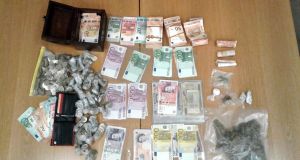 Cash and drugs haul seized by Garda in 2018. Photograph: PA

There is a general perception that judges and the justice system go easier on offenders than they did in years past.

This is something not missed by politicians, especially those of a populist bent, who regularly promise to do something about the scourge of “soft sentencing”.

However many trends suggest judges are becoming more – and not less – punitive. Figures published in Monday’s Irish Times show people caught with large amounts of drugs are twice as likely to go to jail as they were a decade ago.

Meanwhile, the average length of a life sentence has, for the most part, been on an upward trend in recent years while the proportion of short sentences handed down for minor crimes has increased by a third.

This trend is likely to continue. If in government after the election, Fianna Fáil has promised mandatory sentences for knife possession and an expansion of powers for gardaí in organised crime cases.

Most people want to see more done about serious crime but it is important to question the benefits of travelling further down this road.

Some measures, like the expansion of the powers of the Special Criminal Court, have undoubtedly made it easier to prosecute highly dangerous criminals such as Freddie Thompson or hitman Imre Arakas (the associated impact on civil liberties is a price most people seem happy to pay).

The case for mandatory minimum sentences is much less clear. Legislation governing large scale drug dealing was introduced in 1999 in a febrile atmosphere. There had been an explosion in the volumes of drugs being imported into the country by organised criminals. It was one of these ascendant gangs which murdered journalist Veronica Guerin in 1996. The government introduced the Misuse of Drugs Act, specifically section 15(a) which mandated that anyone caught with £10,000 (€13,000) worth of drugs should receive a 10-year mandatory minimum sentence.

It became the third crime, along with murder and firearms possession, to attract a mandatory minimum.

Crucially however, the legislation also contained a proviso that a lesser sentence could be imposed in “exceptional and specific circumstances”.

From the beginning, judges – perhaps resentful of the encroachment of the Oireachtas on their sentencing powers – interpreted this provision in a broad manner. An offender co-operating with gardaí, even in a limited way, was viewed as an “exceptional circumstance”. So was a guilty plea. And since the vast majority of offenders pleaded guilty, the vast majority did not receive the mandatory minimum sentence.

Since then the higher courts have repeatedly upheld the idea that a 10-year sentence should be the exception rather than the rule. Judging from the Dáil debates of the late 90s, this was the exact opposite of the government’s intention. Today only about 7 per cent of offenders get 10 years or more.

Despite being rarely implemented, the law has drawn criticism from reformers. Several years ago the Law Reform Commission said that organised criminals have adapted to the law. Instead of holding on to the drugs themselves, they pay or coerce others to do it for them. Many of these patsies are vulnerable or addicted to drugs themselves.

The law may be deficient in other ways and, in certain circumstances, could even be benefiting criminals.

Barrister Garnet Orange SC said some people are set up for arrest by their rivals or associates, “and they have no idea who reported them”.

Although section 15(a) rarely directly results in serious criminals being taken off the streets, it can be useful to gardaí in other ways, said Orange, who wrote the book, Drug Crime in Ireland.

Detectives use it as “leverage”, he said, by holding the prospect of a 10-year sentence over a suspect unless they provide information.

In return for names of accomplices, gardaí will undertake to tell the court the defendant named names, something which is almost always taken into account by the judge.

Of course, stating in open court that a defendant had provided names to gardaí could result in serious risks to their safety. To get around this, barristers use a kind of code, saying things like suspects were “of assistance” or “co-operated with gardaí”. In particularly sensitive cases, a sealed letter is sometimes handed into the judge detailing the defendant’s assistance.

Orange also pointed to another possible unfairness. The law takes no account of inflation. When the euro came in, the threshold was merely converted from £10,000 to €13,000 of drugs. “That buys you a lot less now than it did 20 years ago,” he said.