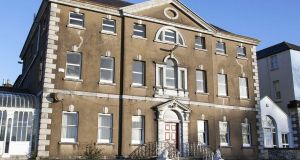 Bessborough, set up as a Mother and Baby Home in 1922 and closed in 1998, was owned and operated by the Congregation of the Sacred Hearts of Jesus and Mary, based in Chigwell, Essex, in the UK. File photograph: BBC

The Bishop of Cork and Ross, Dr Fintan Gavin has welcomed a commitment by religious orders involved in mother and baby homes to talk to the Government about establishing a redress scheme for former residents and their children.

Bishop Gavin said some of the religious orders had already indicated their willingness to contribute to a scheme of redress, and this was welcome even though the issue of restitution was a complex matter.

He noted that the Commission of Investigation into Mother and Baby Homes, which looked at homes such as Bessborough in Cork city, acknowledged that the issue of redress could not be resolved speedily or easily.

“The Report of the Commission of Investigation recognises that the question of redress is a complex one which may take some time to address and will require careful attention to the voices and needs of the people most directly affected.”

Bishop Gavin pointed out that, although Bessborough was located in Blackrock in Cork city and within the Diocese of Cork and Ross, the diocese was not legally involved with the ownership of the approximately 60-acre property.

Bessborough, which was set up as a Mother and Baby Home in 1922 and closed in 1998, was owned and operated by the Congregation of the Sacred Hearts of Jesus and Mary, based in Chigwell, Essex, in the UK.

However, notwithstanding the fact the order was based in the UK, Bishop Gavin said he would support calls that any process for the disposal of assets owned by such orders “would include the moral rights of the survivors”.

“The question of apportioning any liabilities for a redress scheme is one which will have to be agreed by all the parties who bear some of the responsibility,” he said, adding he did not expect the diocese to be involved in such discussions.

He said he fully recognised that former residents of mother and baby homes and their children born in institutions such as Bessborough were anxious to piece together their personal histories.

He acknowledged, however, that there were legal issues regarding balancing privacy and access, but believed legislators could find a way around the challenges to facilitate the Church making its baptism records available.

“I appeal to our legislators to find ways so that birth and baptism record information can be legally shared with compassion and sensitivity with those to whom it rightly belongs,” he said.

Minister for Children Roderic O’Gorman said he was deeply aware of the importance of birth and baptismal certificates for adoptees, and that providing such information was key to the Government’s efforts to rebuild trust with adoptees.

“We’re engaging with the Attorney General regarding how an approach based on the GDPR can achieve the goal of providing access to birth certificates and early life information,” said Mr O’Gorman in a statement to The Irish Times.

Bishop Gavin made his comments in a statement where he apologised for the Catholic Church’s role in creating “a culture of fear, judgment and secrecy” around mother and baby homes such as Bessborough.

Bishop Gavin said he was asking forgiveness from all the pregnant and isolated women and their children who ended up in homes such as Bessborough, which saw some 9,768 women and 8,938 children pass through its doors.

Of those children, some 923 died as infants in Bessborough, with infant mortality there peaking in 1943. That year, 75 per cent of children born in the home died within the first year of life, the Commission of Investigation found.

Bishop Gavin welcomed the report, which he said describes “a very sad chapter in our Irish history” adding he was particularly struck by the courageous testimonies of the women and their adult children who had shared their stories.

“I feel a sense of shame and embarrassment for how, as a Church and a society, we failed so often to respond compassionately to their needs,” said Bishop Gavin, adding his thoughts were all the former residents of such homes.

“As Bishop I want to acknowledge the part played by the Church in contributing to this culture of judgment and secrecy which, at times, showed so little compassion or respect for the women and their babies.”

Bishop Gavin said that through a culture of fear, judgment and secrecy, women who were pregnant felt isolated and abandoned and had nowhere to turn but to these institutions, where they were treated as second class citizens.

“I believe it is only in acknowledging the truth of this reality and the hurt and pain experienced that we can begin the journey of healing,” said the bishop, as he praised Judge Yvonne Murphy and the Commission staff for the report.