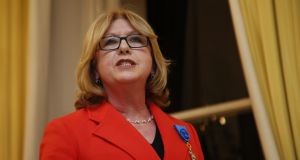 Mary McAleese has said she was “surprised” by the “speed and humility” of the apologies offered by bishops and religious orders following the publication of the report by the Commission of Investigation into Mother and Baby Homes this week. File photograph: Nick Bradshaw

Former president of Ireland Mary McAleese has said the Church was “more complicit than most” in the mother and baby home scandal.

Ms McAleese added she was “surprised” by the “speed and humility” of the apologies offered by bishops and religious orders following the publication of the report by the Commission of Investigation into Mother and Baby Homes this week.

“I think the Church was more complicit than most. A subservient State was complicit with the Church,” Ms McAleese told RTÉ’s Brendan O’Connor show on Saturday.

Ms McAleese said the Catholic Church in Ireland, of which she is a member, “imposed a culture of fear on uneducated people and it told them emphatically that by baptism they were obliged to obey the teaching of their Church, and they had no choice in that”.

“They were also told that by baptism they had to remain members of that Church for life, so in other words from day one their right to information, that was curtailed by the Church, their right to freedom of conscience, they didn’t have that, the Church told them that they would inform their conscience,” she said.

“Their rights to freedom of opinion, that was gone because that was subservient to obedience to the bishops, and that continues to this day incidentally.”

Ms McAleese said today adults can walk away from the Church if they feel they want to, and that the Catholic Church and other major faiths had “really yet to come to terms with the whole idea of individual autonomous human rights”.

Ms McAleese pointed out that 90 per of primary school children and 60 per cent of second level students attend Catholic schools.

She said what she found most striking about the report was “how easy it was for all of us, society, Church, the law, to completely overlook the children”.

The former president said the report “tells us a lot about our history and our past, about our present, and gives us navigational tools in terms of its recommendations about where we need to get to”.

Ms McAleese said she had been “very taken and surprised” by the speed and the humility of apologies and analysis offered by a number of bishops and a number of religious orders following the publication of the report.

She said she does not believe the Church has ever “taken its role as a conduit of misogyny for generations seriously”.