Taoiseach to brief mother and baby home survivors on report 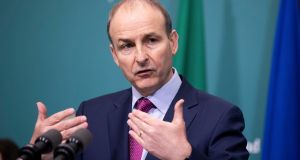 Decades after being banished or born behind the walls of mother and baby homes, survivors will, on Tuesday, receive the report of a commission of investigation into the institutions, revealing a litany of suffering and silence.

Minister for Children Roderic O’Gorman will brief Cabinet colleagues on Tuesday morning on the report after which he and Taoiseach Micheál Martin will take part in an online briefing with survivors’ groups to discuss its contents.

The report, compiled by Judge Yvonne Murphy after six years of investigative work, will then be published in the afternoon.

The Taoiseach is scheduled to make a formal State apology to former residents and those affected by the homes in the Dáil on Wednesday, despite calls from campaigners and Opposition TDs to give survivors more time to digest the findings before doing so.

The homes were generally institutions run by nuns where women who became pregnant outside marriage gave birth. In the main, these babies were adopted in return for donations. The commission investigated the treatment and abuse of women and children in 18 such homes and four county homes between the 1920s and 1990s.

The Government’s response to the report will include a commitment to examine a redress scheme, which could see those who were residents of the homes receive compensation. However, The Irish Times understands there have been stark divisions in Government over such a scheme, which have contributed to the delay in publishing the report.

Mr O’Gorman has pushed for a compensation fund, but some Ministers and senior officials have disputed the State’s responsibility for the practices in many of the homes, or for placing women in them. There is also tension over the publication of some details of the report in a newspaper at the weekend, with an investigation into this promised.

It is expected that provision for counselling and healthcare will be made for former residents should they desire it. The Government will also commit to legislation to make it easier for people who were adopted to trace their birth parents.

The Clann Project, which campaigns for the former residents of the homes, has sent TDs a briefing document outlining their requests, including unconditional access to birth certificates, right of access to their records, an enhanced tracing service, and redress and reparations. The group also laid out 11 grounds that the State apology should cover.

Sources with knowledge of the report say Ireland will once again be brought face to face with a dark chapter from its past. The commission had contact with more than 500 people who were either residents in or affected by the homes, and many of their stories are said to make for harrowing reading.

Tánaiste Leo Varadkar on Monday said the story of the homes was a “failure” by society and a source of “shame”. He told RTÉ Radio’s Today with Claire Byrne programme there was “essentially a stolen generation of children who didn’t get the upbringing they should have had...”