Brett told phone might be monitored, but former commissioner reassured him 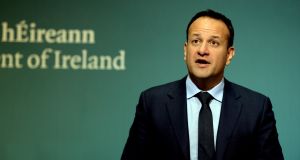 Mr Brett said that he told then transport minister Leo Varadkar that there were rumours about Sgt McCabe. Photograph: Cyril Byrne / THE IRISH TIMES

The former chief executive of the Road Safety Authority was told by the then Garda press officer, Supt David Taylor that his phone could be monitored, the Charleton tribunal has heard.

Noel Brett told the tribunal that he was later assured by then Commissioner Nóirín O’Sullivan that he was not on a list of intercepted phones.

Mr Brett said that in 2012, Conor Faughnan of the AA passed on to him information about irregularities with penalty points. He said he later met with whistleblower Sgt Maurice McCabe about the issue and contacted the Comptroller and Auditor General, and GSOC as a result.

The tribunal is looking at allegations that senior gardaí­ were smearing Sgt McCabe to politicians, journalists and others.

Mr Brett said that on one occasion he and RSA chairman Gay Byrne had to walk out of a meeting with former Garda Commissioner Martin Callinan that had become heated.

He said that Sgt McCabe was not discussed during this meeting, which covered road safety issues. Mr Brett said that there were rumours circulating about Sgt McCabe, and “You’d hear it in the civil service, you’d hear it from media people. It was as vague as ‘You can’t trust him, he’s got issues’.”

Mr Brett said that he told then transport minister Leo Varadkar that there were rumours about Sgt McCabe. He said he did not hear the rumours from Garda members.