Arlene Foster says abortion result will have no impact on North 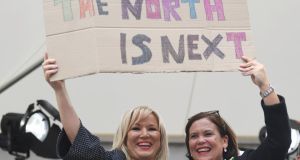 The abortion referendum result will have “no impact” on Northern Ireland’s restrictive regime, Democratic Unionist Party leader Arlene Foster has declared, despite calls for change.

She said the legislation governing abortion was a devolved matter, and it was for the Northern Ireland Assembly to debate and decide such issues, adding that the DUP remained “a pro-life” party.

The UK’s 1967 Abortion Act does not cover the North, and abortion remains illegal there unless a woman’s life is at risk or there is a risk to her mental or physical health that is long term or permanent.

“We will continue to articulate our position. It is an extremely sensitive issue, and not one that should have people taking to the streets in celebration,” said Ms Foster.

Sinn Féin’s leader Mary Lou McDonald said she wanted urgent action to make abortion more widely available in the North, but that change should not be imposed by Westminster.

“I think it would be a scandal if a woman in Dundalk was to have rights and access to services a woman in Newry was denied,” she said, but the change should be made by Stormont, not by London.

Northern Ireland was now “increasingly” seen “as almost being a backwater in respect of recognition of people’s rights” given the restrictions on abortion, the lack of gay marriage and other issues.

“I think it is very important, not least with the Brexit trauma in the wings, that we ensure services like that are freely available to every woman who calls this island home.”

Sinn Féin’s ardfheis is due to take place in Belfast on June 15th/16th.

Ms McDonald said while everyone in the party was entitled to a position of conscience on abortion, when it came to making law for society and formulating public policy elected representatives were bound to a “democratic, considered, collective position”.

Responding to Saturday’s landslide result, Amnesty International Belfast-based official Grainne Teggart said: “The referendum result is a momentous win for women’s rights. This marks the beginning of a new Ireland – one that really does trust and value its women.

“It must not be forgotten that us women in Northern Ireland are still persecuted by a Victorian-era abortion ban. It’s hypocritical, degrading and insulting to Northern Ireland women that we are forced to travel for vital healthcare services but cannot access them at home.”

She said the British government could “no longer turn a blind eye and deny us equality”.

“We cannot be left behind in a corner of the UK and on the island of Ireland as second class citizens.”

Meanwhile, the London Irish Abortion Rights Campaign, which has some 2,000 members, said it would continue to campaign for change in Northern Ireland. “We are campaigning for rights across the island of Ireland, so the women of Northern Ireland are very much in our thoughts,” said Claire McGowran.