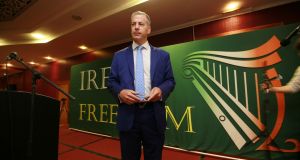 A new party set up to try and persuade Irish people that they should leave the European Union has spent almost €40,000 on a billboard campaign across Dublin, industry sources have estimated.

A spokesman for the party would not disclose how many advertisements would be placed on billboards around the country, or how much the campaign will cost.

Industry sources, however, have said that it costs roughly €1,300 per billboard for a two-week period in Dublin.

A spokesman for the party, James Darby, said: “The total number of billboards across Ireland and cost, for now, is a commercial agreement between us and the advertising agency.”

He said the funding for the campaign came from donors who “are members of our party whom we know. We will be complying with all legal requirements”.

Mr Darby did not answer questions about whether the donations received to date are in line with Standards in Public Office (SIPO) Commission guidelines. Under those guidelines, a third party must register with the Commission if a donation exceeding €100 is accepted which is directed towards a political purpose. The party is not yet registered as a third party with SIPO.

“The billboard campaign was funded by donations from generous and patriotic members of the IFP alone,” Mr Darby said. He said they are looking for official political party registration and will be running candidates in the European elections.

Among the candidates in the running will be party chairwoman Prof Dolores Cahill of UCD. She is professor of translational science at the School of Medicine. Also, party founder Hermann Kelly, who was spokesman for the Ukip-led Europe of Freedom and Direct Democracy (EFDD) grouping in the EU parliament.

The party claimed it had a “unique appeal” in a press release issued last week.

“For the first time in recent history, voters have a real choice. It is time to reject the politically correct Europhile establishment. Embrace the patriotic alternative with the Irish Freedom Party.

“We have unique appeal. We are the only party who believe in Irish freedom and national sovereignty. The Irish people deserve a proper choice and vision for our country. The days of subservience to foreign authority should be over. “We are a patriotic party of national sovereignty in favour of a smaller state, lower taxation, free speech, and control of our shared national resources for the benefit of the Irish people.”

On its website, a key principle is listed as “re-establishing independence”. The party says this can be done by “taking back control by the Irish People of our law-making, our citizenship, our currency, our trade policy, our borders and immigration policy”.