Simon Harris insists Government has prioritised setting up the legislation 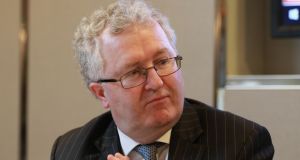 Senior members of the judiciary have raised concerns with the Attorney General Séamus Woulfe over the proposed tribunal for women affected by the CervicalCheck controversy.

It is understood that judges have expressed concerns to Mr Woulfe about the proposed structure of the tribunal and how it will operate.

One concern centred on the issue of resources and the number of judges left in the Court of Appeal. The Government has appointed Ms Justice Mary Irvine to chair the tribunal. She has been a judge of the Court of Appeal for four years.

The Government last week pledged to cut waiting times for Court of Appeal cases by appointing an additional six judges.

Questions have also been asked in relation to how the appeals process will work, a source said. Appeals will go to the High Court.

Sources have also said that the legislation has presented unique legal challenges because it must allow for the determination of liability outside of a normal court setting.

It is understood that a meeting took place last week between senior Government officials in order to resolve some of the concerns raised.

The Government first became aware of the concerns after the judiciary wrote to Mr Woulfe in recent weeks.

The Minister for Health Simon Harris has also met with Mr Woulfe to discuss the legislation, which has been described as highly complex, and it is understood the two spoke about the need to avoid the duplication of resources.

The Department of Health is also looking to source a premises for the new tribunal. The legislation needed to set up it up will be brought before Cabinet in April, a senior source indicated.

The department has also brought in external legal assistance to help with the drafting of legislation.

The tribunal was recommended by Mr Justice Charles Meenan in his report on an alternative system for dealing with cases arising from the controversy.

It is intended that the tribunal will provide a less adversarial approach than pursuing a case via the courts. Hearings are expected to be held in private.

Speaking last month, Mr Harris said that a tribunal of this sort has never been set up before in Ireland.

“An adjudicative tribunal has never been set up in Ireland before for an issue like this. We did have the compensation tribunal for those affected by hepatitis C. That was different, however. There was no issue of potential negligence that had to be demonstrated. The adjudicative tribunal is our response in trying to provide alternatives to the court system.

“The idea is that this scheme will not be about compensation and will not in any way interfere with any woman’s right to go to court, pursue issues legally or access the tribunal in due course. It is a recognition that disclosure was not made to the women concerned and the impact of that non-disclosure is something the State, regardless of the law, has a moral liability, I believe, to address.”

Mr Harris said that the Government has prioritised setting up the legislation. “The Government has basically said the only legislation it is able to do is Brexit-related, [but] the Meenan report and tribunal have made the list. In other words, such is the seriousness of it we are making an exception and Meenan is absolutely included in the Government’s legislative programme.”