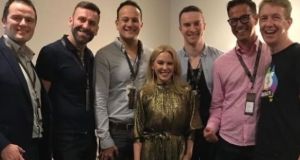 Taoiseach Leo Varadkar asked pop star Kylie Minogue if he could welcome her to Ireland personally when she came to Dublin for a concert last year.

Mr Varadkar wrote a note to the Australian singer and actress on official headed notepaper from the Office of the Taoiseach, which was released following a freedom of information request.

The letter, which was signed “Leo V Taoiseach (Irish Prime Minister)” was sent before Ms Minogue’s planned concert at Dublin’s 3Arena on October 7th, which she had to reschedule due to a throat infection.

“Dear Kylie,” the Taoiseach wrote. “Just wanted to drop you a short note in advance of the concert in Dublin. I am really looking forward to it. Am a huge fan! I understand you are staying in the Merrion Hotel which is just across the street from my office in Government Buildings. If you like, I’d love to welcome you to Ireland personally.”

The Merrion Hotel has played hosts to less-welcome delegations who have made their way across to government buildings, most notably the team of troika officials who oversaw Ireland’s three year bailout programme.

The Mail on Sunday, which obtained the letter, reported that the Department of the Taoiseach twice refused a request for the letter to be released under Freedom of Information legislation, arguing that it was written in a personal capacity by the Taoiseach and “does not relate to matters arising in the course of, or for, the purpose of the Taoiseach’s functions as the head of Government”.

Ultimately the Taoiseach consented to the release of the letter after an appeal against the decision was refused.

Mr Varadkar received a phone call from the singer apologising for the cancelled gig, the paper reported. He eventually went to the rescheduled concert, which took place on Monday December 3rd. He appeared in a photograph shared on social media with the Australian singer alongside his friends and partner Matt Barrett. Following circulation of the picture, Mr Varadkar was forced to deny that he had received a free meal at the gig.