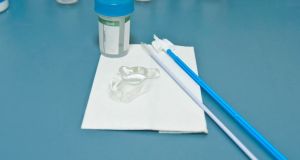 The Health Service Executive (HSE) is coming under growing pressure to suspend the cervical cancer screening programme so the massive backlog of unread slides can be cleared.

Laboratories processing the slides for CervicalCheck believe a temporary suspension is the only feasible way of clearing the backlog of over 78,000 slides.

A two-month suspension of the programme would allow the backlog to be cleared, after which normal operations would be restored, the labs are expected to tell the HSE in urgent talks this week.

With a restoration of the normal four to five week turnaround time, this would provide for women receiving their test results in little over three months. At present, the average delay is over six months.

The issue is becoming critical as some slides are approaching their expiry dates, meaning women may have to recalled for repeat smears.

Despite apparently extensive efforts, the HSE has been unable to access significant additional processing capacity in Ireland to deal with the backlog, which developed after Minister for Health Simon Harris last year offered women free out-of-cycle tests.

Attempts to source capacity overseas have foundered over indemnity issues and concerns about labs about being sued for work carried out on Irish slides.

An alternative solution is to introduce HPV testing, which is more accurate than traditional smear tests. However, the HSE says it needs to “stabilise” the screening programme by eliminating the backlog before this type of testing can be introduced.

Meanwhile, Labour has called on Minister for Health Simon Harris to explain why women paying privately for smear test results get them in a fraction of the time, from the same lab, as women whose tests are carried out under the CervicalCheck programme. Over 78,000 women are waiting for results.

Yet women who pay privately for a test from MedLab, which is carrying out most of the tests on the public health list, can get their results within two to three weeks. The cost of a smear test to a private patient varies from €85 to €100.

Labour health spokesman Alan Kelly said it was “not right” that those who could afford to pay privately for a test were getting their results far faster than women in the national programme.

“Waiting for any test result to come back can be anxiety-inducing but if you are a woman who knows she is at risk and is waiting over seven months for results, it can be extremely worrying. This delay in further diagnostics could potentially have further impact on a woman’s health.”

MedLab said less than 2 per cent of the smear tests it processed daily were private. The women involved were typically aged under 25 and therefore not covered by CervicalCheck, or needed a fast result because they were symptomatic.

“Private smear testing is available for all, but is most frequently required by women who have been referred by their GP due to existing symptoms or who do not qualify for the Cervical Check programme,” a spokesman said.

The company, which is based in Sandyford, Dublin, had extended the turnaround time for private clients so as to accommodate more processing of CervicalCheck slides, he said.

MedLab is one of three laboratories processing smear tests under the CervicalCheck programme. Another lab, the Coombe Hospital also offers a private service.

Covid-19 advice sent by text to 1,511 arrivals from Brazil amid new strain