‘We name the dead and the killers, whispered names, episodes we shouldn’t have known about’

Anti-Brexit campaigners have protested at six different points of the Border between the Republic and Northern Ireland, fearing a return of customs checks could risk peace, jobs and their way of life. Video: Reuters 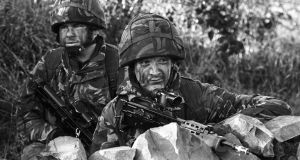 She came over to me on a night out. She introduced herself as the little fair-haired girl on the school bus; I was tiny, she said, you mightn’t remember.

It was the service bus that crossed the Border at Carrickcarnon on the Dundalk-Newry road taking us to school. I didn’t remember her being on the bus. There’s a silence you get in the school bus when an armed soldier gets on board. There’s a watchfulness, something’s been violated but you don’t know what it is. There is a silence and then there is the sound of a rifle barrel held muzzle-down as it strikes the chrome hand rail beside your head. Everything is hyperreal: the battledress, helmet, boots and face streaked with camouflage. You suddenly know what a soldier is for, what their real work is.

We sit at the same table and talk Border talk. We’re both from a mile either side of it. We name the dead and the killers, whispered names, episodes we shouldn’t have known about and know we should forget. The young smuggler in the bank queue flashing a bank draft for a million pounds, smelling of laundered diesel, the grin of him, the epic cheek. He was shot dead two weeks later. The relative dragged out of bed and shot in front of his mother. The darkness of everything. She told me that when she was a teenager she had heard shots on the road outside her house. When she went out she saw a man sitting in a car. He had been shot in the head with an assault rifle. His hands were still on the steering wheel. The side of his head had been blown away. There was no blood, she said. You could see his brain, clear as day, the grey lobed mass of it. It was like something out of an anatomy book, she said.

Let us take the Border as genre. On television you see fields, cows, a man in a cap looks over a gate, talks about smuggling butter, the thing is cast as pastoral, the wrong genre, deliberately the wrong genre. The real genre was dystopia, society in dissolution, everything broken down. It is Cormac McCarthy’s The Road. Death’s corps are in charge, they patrol the night. Militias emerge from the darkness and return to it. Everybody is watching everybody else and you can’t get a grip on any of it. Things happen, people get killed, human viscera hanging from telegraph wires and the real story doesn’t get out. You’re hemmed in by checkpoints, by control towers. The roadside corpses are booby-trapped.

Everything is shadowy and you’re always avoiding something, you’re always complicit. You’re being watched from the mountaintops. If records are being kept they are being altered or destroyed. The red bead on your jacket is a soldier’s infrared scope. The incident that occurs in front of your eyes is something else by the time it gets to the news that evening.

That’s what got shut down when the Border was opened up. One of the lost, godless zones of the late 20th century. They’d know what it was in Berlin, Santiago, El Salvador, Guatemala; anywhere you’d find a corpse lying by the side of a remote road.

One last story came up that night. A work friend was in the traffic queue at the Cloghogue checkpoint outside Newry. “A bomb was lowered down the the railway track behind the checkpoint. It exploded, killing one soldier. The other soldiers ran past my car, threw their rifles away and they were squealing,” he said. “They were not like people at all,” he said. “I didn’t believe a living mouth could make such a sound.”

The soldiers ran into the darkness and then there was silence, because such a place is a maw that swallows everything, even the inhuman cries of men in terror.

In the DH Lawrence poem Man and Bat, the poet enters his hotel bedroom in Italy. A bat flies about the room and Lawrence attempts to chase it through the open window into the mid-morning sunlight, then realises that the bat could not fly into sunlight “any more than I could enter the white-hot door of a blast-furnace”. It is not that we will refuse to go back to the Border as it was. It is that we cannot go back, any more than Germany could return to the Berlin Wall, any more than Argentina could go back to the disappeared.

I saw her a few months later in the same bar. She was remote. Something had shut down. I saw her husband watching her. But as she stood up to go I finally recognised her. She had indeed been tiny, a wisp looking up at the soldier standing over her on the bus, her eyes filling with knowledge. The child’s eyes you saw on the news, again and again, sitting on a pile of rubble, staring through barbed wire, face dirty, looking up, the world dawning on them.

They know that when a soldier gets on your school bus then death gets on with him and when the soldier leaves, death doesn’t always leave. There’s a new drab passenger on the route and whether you want it or not, he has made his destination coincide with yours.