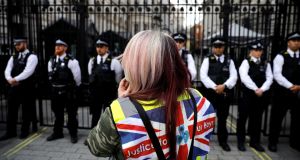 Like Arnold Schwarzenegger, Theresa May will be back. With her withdrawal agreement. Again. Her “back me and sack me” pledge was widely described as falling on her sword – and missing.

But the Terminator-style determination to return to parliament next week with Meaningful Vote 4 (or Meaningful Vote 3 depending on how you look at it) is just the latest in a long line of cynical manoeuvres that are widely described – and admired – as stubbornness, but are, in reality, simply nuts.

The resemblance of May’s withdrawal agreement to Monty Python’s dead parrot is too obvious to resist. For anyone who thinks it has already been voted on three times already, last Friday’s vote was on the zombie version – it didn’t really count as it had been separated from its twin, the political declaration. Such is the arcane nature of British parliamentary procedure.

Brexit is a study that should be taught in every school. The skills that young people need to succeed are less the academic qualifications that everyone focuses on but more the ones so evident by their absence on the British side of the negotiating table.

The chances of a cliff-edge departure next week are high. It looks like a 50-50 call to me

The ability to negotiate is a pre-requisite for career progression: whether it’s with customers, the boss or your fellow workers, the skills to handle tricky negotiations are the ones that will help determine how well we do.

And we rarely teach how to do this. Attention to detail is another: it might seem obvious, but familiarity with your brief is not just a prerequisite for legal types. British MPs who claim they used to be lawyers revealed why they may have decided to change careers.

Dominic Raab, for instance, was head of the negotiations for a short while and repeatedly revealed ignorance about the detail. Things like Dover being an important trading port.

Just look at what happened. One side turned up, on time, well prepared, well read, with a fully-articulated negotiating position that, with some flexibility, was broadly adhered to. The other side didn’t. The only surprise is that anyone is surprised by the outcome.

The chances of a cliff-edge departure next week are high. It looks like a 50-50 call to me. Amid all of the noise of last week, not enough attention was focused on the fact that 160 British MPs voted for a no-deal Brexit.

That’s a quarter of Britain’s elected representatives actively seeking all of the chaos that would a accompany such a rupture with the EU.

At best, it represents a simple misjudgment. At worst, it looks like an embrace of revolution – if not anarchy – so that hidden agendas can subsequently be revealed. The scary fact is that these wannabe revolutionaries could well succeed.

The short term is unpredictable but the longer term outlook is reasonably clear. Whichever way Brexit goes, the divisions in British society and culture are not going to be quickly healed.

Brexit has become the topic that is never to be mentioned in polite company.

To do so risks friendships and fist fights. It’s important to understand that the post-referendum Brexit process has itself caused those divisions to widen further. Handled differently, things need not have got this bad. These divisions are May’s legacy. Her priority, the unity of her party, has risked the disunity of the UK, and possibly its break up.

A million people marched in London a week ago to ask for a second referendum. They took their litter home with them. A few thousand Brexiteers marched a couple of days ago with many displays of intimidation towards those with whom they disagree.

Not all Leave voters were fascists or extremists of any kind but it is pretty clear that all of Britain’s fascists did vote for Brexit.

These kinds of fissures, once opened up, take a long time to close and often lead to a crisis of one kind or another.

The great financial crisis is sometimes described as a “Minsky moment”, named after the great economist who warned that long periods of economic stability often prompt and conceal ever-increasing risky behaviours.

People feel more comfortable taking ever bigger risks because of that stability. That risk-taking can pass a point when crisis becomes inevitable: the system becomes too fragile; vulnerable to the smallest shocks.

Maybe it’s the same with political stability. People feel comfortable taking ever extreme views because the consequences of doing so are not obvious, at least for a while. As things remain superficially stable, extremists become ever more emboldened.

Today, with the added amplification of social media, Britain feels more extremist than I can personally recall. On this line of thinking, people won’t retreat from their deeply held positions until a crisis forces them to do so.

As with the financial crash, so the resulting political crisis could be horrible. The question naturally arises: has Brexit broken Britain?