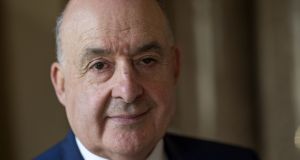 Aindrias Ó Caoimh, former High Court and European Court of Justice judge, was one of 100 legal professionals who signed a letter opposing the repeal of the Eighth Amendment. Photograph: Dara Mac Dónaill / The Irish Times

A group of 100 legal professionals including two former High Court judges have signed a letter opposing the repeal of the Eighth Amendment.

The group stated that what is being proposed through the legislation if the amendment is repealed is “not simply abortion in exceptional cases but a wide-ranging right to abortion”.

The letter states that the recent M v Minister for Justice Supreme Court case demonstrated that the rights of the unborn under the Constitution are “limited to those rights which are acknowledged in the Eighth Amendment”.

They stated that “as lawyers drawn from every level of the profession”, they hoped the public would come to the conclusion that it would be “profoundly unjust to withdraw the existing constitutional protections from the unborn child or to give Government the power that they seek to legislate in this area”.

Among those who signed the letter were Aindrias Ó Caoimh, who is a former High Court and European Court of Justice judge, and Iarfhlaith O’Neill who is also a former High Court judge and was chairman of the Referendum Commission during the Lisbon Treaty.

Others who signed up include Mary Faulkner, the former Dean of the School of Law in King’s Inn, Dublin and former RTÉ television presenter-turned-barrister Theresa Lowe.

The press conference was supposed to have been held at the Bar Council offices in Distillery Building, Church Street, but the council cancelled use of the room at short notice.

A spokesman said the Bar of Ireland was a non-political organisation and its premises could not be used for any political activity.

He said some of those who lent their names to the letter were traditionally “pro-life” but others had difficulties with the specific provisions and the proposed legislation which will occur if the public vote to repeal the Eighth Amendment.

“I don’t want to undermine anybody’s position. Everybody comes at it from their own perspective. They have concluded that the proposal is an unjust one,” he said.

“They have concluded that the unborn boy or girl in the room is deserving of rights, and legislation is not the way to do it. I don’t know what label one would put on that.”