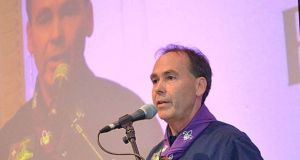 Chief scout at Scouting Ireland Christy McCann: along with David Shalloo, chief commissioner for youth affairs, he is “temporarily” standing down.

Four senior Scouting Ireland figures have stepped aside from their positions while an independent inquiry is completed into how senior volunteers in the organisation handled a rape allegation in 2016.

Minister for Children Katherine Zappone has received several “grave and serious” confidential disclosures about Scouting Ireland since revelations in The Irish Times of the organisation’s flawed handling of the 2016 allegation.

Chief scout Christy McCann announced on Thursday he had informed the organisation’s board that he was “temporarily” standing down.

David Shalloo, chief commissioner for youth affairs, said on Thursday night he would “temporarily step aside” from his role, pending the investigation’s conclusion.

A barrister-led investigation is looking at the actions of Mr McCann, Mr Shalloo, Ms Bermingham and Mr Kehoe in handling the rape allegation.

A confidential review by child protection expert Ian Elliott, into the treatment of the 2016 complaint, in which a female leader claimed she was raped by a male leader on a camping trip seven years earlier, criticised the actions of the four senior volunteers.

The male leader was readmitted to Scouting Ireland after the Director of Public Prosecutions decided not to prosecute. However, Garda advice to resubmit the man for Garda vetting was not followed.

The barrister-led inquiry is expected to be completed next month, at which point the board may consider disciplinary action.

In a statement to the organisation’s membership, Mr McCann said: “I believe it is in the best interests of our organisation” to step down “to give adequate time to bring our investigation to a conclusion.

“As chief scout and as a co-respondent in the process currently under way, I believe my standing-aside is the right thing to do and will help ensure the current process is allowed to continue without delay and further distraction.”

Mr Shalloo criticised the Elliott report, stating he had concerns with “the manner in which the review was carried out and the fundamental inaccuracies and the flaws contained therein”. He said a number of its findings were “wholly unsubstantiated and misdirected”.

In a statement to members he said, “I can say without hesitation or imprudence, that my moral compass has remained properly aligned at all times.” He added it was difficult to witness the organisation “sustain a reputational hammering”.

Speaking afterwards, she said there was an “enormous job that has to be completed” to provide assurances over the body’s governance.

Last week, Ms Zappone suspended State funding to the organisation, worth nearly €1 million a year, due to governance concerns over the board’s response to Mr Elliott’s report.

“In view of this I decided to withhold any further drawdown of funding to Scouting Ireland until such time as I can be satisfied that the organisation’s governance standards are up to the required level. As of now I am not satisfied.”

“This means that Scouting Ireland is funded up until the end of June,” the Minister said. “It is my sincere hope that Scouting Ireland will utilise this time to engage constructively with myself and my officials, to address all outstanding issues relating to the standards of governance within the organisation.”

The Scouting Ireland board held an emergency meeting on Wednesday night which lasted more than four hours.