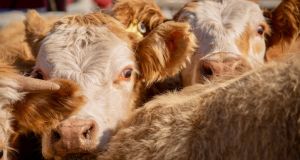 Claims that Ireland not operating to the highest animal welfare standards when it comes to live exports.

Caroline Rowley of Ethical Farming Ireland criticised the suggestion that Irish animal welfare standards are in line with international standards.

Mr Creed told The Irish Times last month he did not consider a call by Ireland South Green Party MEP Grace O’Sullivan for a total ban on live animal exports to be viable. He said he believed Ireland met international welfare standards.

Ms O’Sullivan had called for a ban on live exports from Ireland after it emerged that 14,000 sheep had drowned when their ship capsized in the Black Sea en route from Romania to Saudi Arabia.

“I absolutely reject Grace O’Sullivan’s call to stop live exports because our exports are based on the highest welfare standards and I believe it is possible to continue that trade, having animal welfare at the heart of it,” he said.

“Certainly Fine Gael in government has a clear commitment to live exports and in fact it has increased over the last number of years but only on the basis that it operates to the highest welfare statements and that’s critically important.

“In the context of our European Union trade, we operate to the highest standards, not just EU standards but EU Plus standards and we do that because the importance of that sector to the Irish agri-food economy is so significant.”

However Caroline Rowley of Ethical Farming Ireland has challenged Mr Creed over his comments, saying there is evidence that Ireland is not operating to the highest animal welfare standards when it comes to live exports.

She raised concern over the use of old converted car transporters ships to export animals which she says should not have been authorised for use. She claimed animals are sometimes on the ships for days before departure, feed is piled up and vessels have had to go on long detours because they have left in stormy conditions. Ms Rowley, who says she has monitored live exports for several years, says regulations are being stretched to the limit