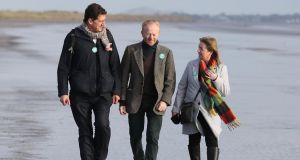 Eamon Ryan is on Bull Island.

Aren’t they all these days? There’s an election on.

No. The Green Party leader is really there – strolling along Dollymount beach in the famous nature reserve having just launched his party’s policy on biodiversity. When he says the island and its wildlife is under pressure from plastic pollution, sewage outflow, habitat loss and rising sea levels caused by climate breakdown, he isn’t talking bull.

The Greens chose this tiny corner of Dublin because its problems point up the dangerous pressures on our living planet today. According to scientists (and the preamble to this policy document) the “sixth mass extinction event, labelled the ‘Anthropocene extinction’, is currently under way”, with experts estimating that global wildlife populations have declined by 40 per cent in the past 40 years.

Ryan and his team, including general election candidates Cllr David Healy (Dublin Bay North) and Cllr Caroline Conroy (Dublin North-West), arrive at the dunes in a hired minivan and head down to the sea.

It is a bracing January morning. The rain is misty and the glorious sky a luminous grey. Apart from some specks on the horizon, they have the beckoning strand to themselves.

The tide is in. Eamon walks alone towards the water’s edge. “It’s like the start of Reginald Perrin,” he muses, staring out at the white-topped waves.

Ah here. Reggie Perrin was a 1970s sitcom character who faked his own death by leaving his clothes and personal effects behind on a beach and disappearing.

Even allowing for understandable worries over the Anthropocene extinction, vanishing curlews and plastic particles in the food chain, Eamon is due to hand in his nomination papers on Wednesday, so a fake disappearance dip off Dollymount – no matter how tempting – was out of the question.

That aside, he seemed remarkably chipper under the circumstances.

This was probably down to Tuesday’s Irish Times poll which had the party at 8 per cent nationally and 15 per cent in Dublin. “Cautiously optimistic” was the feeling just under three weeks from polling day.

“We were pleased because we are doing well and we can feel it. It’s a cliche, I know, but I was around the country yesterday, in Kildare, Kilkenny and Waterford, and it’s the same story in each of those constituencies and around Dublin. We are getting a really good response.”

Pleased with the campaign, taking nothing for granted, much to live up to and a lot of work ahead of them before the big day. All the usual stuff.

Back to the beach. The issue of biodiversity and climate change – “the two really go together” – must be tackled, say the Greens. This is their mission. The party has come up with a range of practical measures to stop and reverse the destruction of Ireland’s plant and animal population. Coalition suitors will have to consider them.

It’s an “ambitious” list because the crisis is real, stressed the former minister for communications and natural resources. “The fact that we’ve lost half of all wildlife in the last 15 years, that so many of our bird species are threatened – same with our bees, same with all our insects, our very soil, the health of our soil is at risk – means decisive action must be taken.”

But hang on a minute here, Eamon Ryan. Your election posters aren’t even eco-friendly. How do you plead?

During a general election, the downside of campaigning on a deserted beach is the lack of voters to canvass

However, he has been reusing them – three election outings so far for what’s left of the old crop. Think Dorian Gray, without the attic or opium habit. After the election, in the spirit of recycling, Eamon is hoping to become a bucket. Or maybe a collapsible table. Where his posters are concerned, he tries to reduce and reuse.

“They are all recycled afterwards and I think they turn most of them into garden furniture.”

During a general election, the downside of campaigning on a deserted beach is the lack of voters to canvass. Although he met a lady called Beatrice and a large gentleman called Bear, who were so very pleased and excited to meet the leader of the Greens they had to sniff him all over. It’s a terrible pity dogs can’t vote.

Their owner, Dr David Quish, can, though. A geographer, he taught for many years in Santa Sabina girls’ school in nearby Sutton. David and Eamon, Bear and Beatrice all agree that the Bull Island is a wonderful resource. “A fascinating example of the sequence of land formation,” said David.

Up in the beak

And what about the crows? Isn’t it great the way they fly high in the air with a mussel and then drop it down on the ground to open it? That’s what they do on the southside in Sandymount anyway, marvelled Eamon. Up in the beak and down until the shell cracks.

Well, said David, the crows in Dollymount “have a sense of tidiness”. He has observed how they have little areas, almost as if “this is our rubbish place and we don’t drop them everywhere. So they have places which are sort of disposal spots for them.”

If only people could be as conscientious.

Would he vote Green?

He said he read a report on how large areas of the natural world are rapidly disappearing and it “shocked me into reality”.

The challenges posed by climate change are vast and complex. The Green leader and his candidates are very knowledgeable on the subject and can, and do, hold forth at length on it. In this era of bite-sized information and an election of brief doorstep encounters, it might help if the main message is easily imparted.

“‘Want Green? Vote Green’ is our election slogan because if you want all these measures that we are talking about, then you have to vote Green,” says Eamon. He has been using his favourite slogan for ages but thinks it is as relevant now as when first he said it: “Think Globally, Act Locally.”

For the party to do well on election day, it is generally believed that younger people have to turn out, although the recent poll suggests a broader support base in terms of age profile.

For Eamon Ryan, “the critical thing is will they turn up to vote.” He reckons it will be a very good day if young people realise they can vote for what future they want. “If we don’t address this crisis they will be living in a planet where it’s not possible to manage . . . Once nature goes beyond a certain point, you can’t bring it back.”

If the slide isn’t reversed those young people “may grow up in a world where nature is denuded, where they will never experience what we’ve been fortunate to grow up with, living with a landscape that’s really rich and alive. And that is why they should go out and vote.”

Not for the first time, and, we suspect, not for the last time, Eamon mentioned one of the shining lights in the global battle to arrest biodiversity loss.

“Let’s do this in honour of David Attenborough.”

He’ll have Greta out on the canvass next.