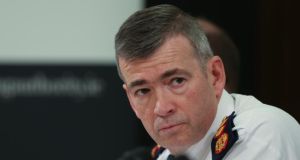 Garda Commissioner Drew Harris has rejected claims made by the Garda Representative Association (GRA) that the force’s armed response capability was at times not fit to deal with a serious firearms or terrorist incident.

In a memo to all Garda members on Tuesday, Mr Harris said:“I want to assure you all, but especially our operational members, that An Garda Síochána has a specialist firearms response capability sufficient to meet any critical incidents that may occur in the State.”

The issue is very contentious as feuding between armed gangs has erupted in Drogheda, Co Louth, and parts of Dublin and Europe remains on alert of Islamist extremist terror attacks.

Furthermore, because uniformed gardaí patrolling across the country are unarmed, the availability of rapid armed back-up should they require it has always been a significant safety concern.

A 2,000-word letter was sent by GRA representative Ciarán O’ Neill on Monday to Supt Alan McGovern of the Garda Special Tactics and Operations Command (STOC) who heads the elite armed unit.

The contents of the letter emerged on Tuesday morning, with Mr Harris later sending a memo countering the main points made in it. The commissioner said that, far from the Garda’s armed response capability being weakened and under-resourced, it had been expanded in recent years and that further expansion was planned.

There was now an armed support unit (ASU) in every Garda region, with two more planned that would be based in Cavan and Enniscorthy, Co Wexford. While courses would soon commence to select more Garda members for ASUs, there were already 180 personnel in the units.

These ASUs were in place as well as the separate emergency response unit (ERU) based in Dublin. The GRA’s criticisms focused on what it said was inadequate resourcing of the ERU, where it said there were 21 vacancies and where overtime had been cut.

Furthermore, while the GRA stated ballistic vests used by Garda members in armed units were now out of date and past warranty, Mr Harris said all ballistic protection kit used by the units was taken for testing each year. He added new ballistic equipment was also being ordered.

The fact the letter was sent and emerged publicly during a general election campaign and after a series of violent attacks, including shootings, in Dublin, Louth and Cork has angered some in senior Garda management.

Mr O’Neill said on last Friday, “a day that the Taoiseach and the Minister for Justice openly stated that there would be no restriction on resources to deal with organised crime”, there was no ERU to deal with “any call”.

He also said gardaí in Drogheda – where a gangland feud claimed the life of Keane Mulready Woods last Friday week – were last week left waiting for a number of hours for required assistance from the ERU.

The senior officer in charge of policing in the region, Chief Supt Christy Mangan, said he had never experienced issues in being supplied armed back-up when requested.

Association of Garda Sergeants and Inspectors president Antoinette Cunningham said the force needed the resources for all units to be at full capacity at all times. Society was changing and becoming more violent and the Garda needed to be able to respond to that challenge, she said.