RIC row: ‘Shameful’ if spirit and tolerance of 2016 events lost 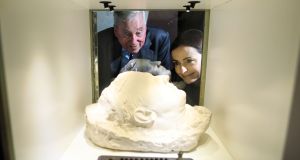 Dr Maurice Manning, chair of the Expert Advisory Group, and Catherine Heaney, chair of National Museum of Ireland, at the opening of the Irish Wars Gallery 1919-1923 exhibition at the museum in Collins Barracks, Dublin. Photograph: Julien Behal Photography

Politicians have been told it “will be a shame, and shameful” if the tolerance that has marked the Decade of Commemorations is lost following the controversy surrounding the Royal Irish Constabulary (RIC).

In a pointed speech on Tuesday night, the chair of the Expert Advisory Group, Dr Maurice Manning, urged “all political parties and their leaders” to realise that “these are fragile times”.

“Genuine leadership requires a proactive approach from them – all of them – in ensuring that the generous, curious and collaborative spirit of the past few years is not shattered.

“It will be a shame, and shameful, if the spirit of openness and tolerance which has made all of this possible is fractured and damaged. We all have a responsibility to ensure this is not allowed happen. We need to make our voices heard.”

The Government and the experts’ group had been “reflecting” since the row broke out early in the new year on the way forward “and we do need to up our game, and will do so”.

Dr Manning was speaking at the opening of The Irish Wars Gallery 1919-1923 exhibition at the National Museum of Ireland in Collins Barracks, Dublin.

The backlash over the now postponed RIC/Dublin Metropolitan Police commemoration at Dublin Castle was “a warning shot which must be heeded”, he said.

The opening of archives and the busy burrowing of historians – professional and amateur – is giving new insights, new knowledge

“Sadly, recent events have not been helpful. In fact they have been worrying given some of the extreme language and political posturing we have seen.”

Dr Manning said he hoped the War of Independence and Civil War commemorations were marked by the same spirit as that shown for the Easter Rising.

“There is as yet no sense of commemoration fatigue. The opening of archives and the busy burrowing of historians – professional and amateur – is giving new insights, new knowledge and a new sense of the complexities of that period.

“As a people we were rightly proud of how we as a country commemorated 1916 with style, generosity and pride. For once we looked like a people at ease with our own history.”