Two men questioned about attack where man was set on fire 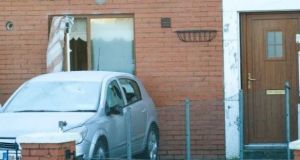 The house in the Dunard estate, Mayfield, Cork where a man was doused with petrol and set on fire. Photograph: Provision

Gardai investigating an attack on a father of three, who was doused with petrol and set alight, have spoken to two men they wished to question in relation to the attack.

The two men, aged 27 and 24, presented themselves at Mayfield Garda Station around midday on Tuesday. They spoke to gardaí investigating the attack on Keith Greaney (23) at Dunard, Lotamore, Mayfield on January 20th.

Mr Greaney was at home with his girlfriend Nicole O’Leary when three men burst into the house just before 4am and dragged from his bed and beat him with an exhaust pipe from a car before attacking him with a machete.

The gang then doused Mr Greaney in petrol and set him alight before smashing the windscreen of his car as they fled the scene in a black Ford Mondeo and a Citroen Berlingo van which gardai later located on the southside of Cork.

The two men, who are from the southside of the city, were not arrested by gardai but spoke voluntarily to them for several hours as they were questioned about events in Dunard in the early hours January 21st.

Gardaí have described the men as “helping them with their inquiries” into the attack . It is understood that their accounts may form part of a garda file into the attack on Mr Greaney who was rushed to Cork University Hospital.

It is understood that Mr Greaney was put in an induced coma by doctors at CUH to enable them to treat serious burns to his head and chest which doctors have described as “life-changing injuries”.

Meanwhile gardaí are continuing to look for a third person in connection with the attack and it is understood that they are pursuing a definite line of inquiry in that regard as none of the intruders were masked.

Neighbours raised the alarm when they realised Mr Greaney’s house was on fire and several witnessed saw the intruders fleeing the scene before HSE paramedics arrived to treat Mr Greaney and take him to hospital.

Two units of Cork City Fire Brigade from Ballyvolane and Anglesea Street attended at the house in Dunard which had gone fire when Mr Greaney was doused in petrol and they quickly brought the blaze under control.

Gardaí say they are keeping an open mind on a motive for the attack on Mr Greaney but they have suggested it may be linked to a dispute of a personal nature with another young man in his 20s.

They have appealed to anyone who saw any suspicious activity in the Lotamore area of Mayfield or has any information that might assist them in their investigation to contact Mayfield Garda station on 021-4558510.