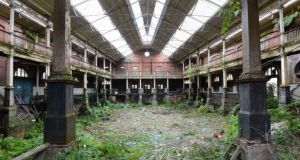 The is is the second time An Taisce has compiled the list of the top ten most at risk buildings and it is the second year the Iveagh Markets has appeared on it. Photograph: Dara Mac Dónaill

The Iveagh Markets in Dublin, Templeview House in Co Sligo and Hope Castle and Market House in Co Monaghan are among the State’s 10 Most at Risk Buildings, announced on Friday.

The list compiled annually by An Taisce highlights the status of heritage buildings, most of which are already on the National Inventory of Architectural Heritage. Many of the buildings have suffered a poor fate, falling victim to natural decay, vandalism and fires.

The is is the second time An Taisce has compiled the list of the top ten most at risk buildings and it is the second year the Iveagh Markets and Carrigglas Demense in Co Longford, have appeared on on the list.

The top ten most at risk buildings in 2020 are:

* The House by the Churchyard, Dublin 20

The register describes Hope Castle as being “ vacant for a number of years and does not appear to be maintained”.

“Most of the external fabric remains, but there are obvious signs of deterioration, such as water penetration, slipped slates, vegetation growth, broken windows and vandalism,” it says. Many of the buildings on the list get a similar appraisal.

An Taisce said the register was compiled because of concern at the “growing number of vacant structures that are falling into a state of disrepair”.

Ian Lumley heritage officer with An Taisce said the top ten are in “no particular order” as all are under threat.

He said “these buildings could be lost to future generations unless direct action is taken soon to preserve them.

They were he said “ buildings of importance, both intrinsically and to the heritage of their local areas, buildings that lie vacant and are in such a state of disrepair that they may be dangerous or have no identifiable new use”.

The assessment of risk is directly associated with the condition of the structure and not the external processes affecting it. The register does not include national monuments, but does include a description of the property, assessment of its current condition and the threats to it.

Individuals and community groups may also make submissions to the list.

An Taisce is interested in hearing from people who have knowledge of heritage buildings which are lying vacant with no identified new use; suffering from neglect and or poor maintenance with structural problems, or are fire damaged and open to the elements, among other reasons.

For the full register, or to nominate a building see AnTaisce.ie.

1 Midlands lockdown: Movement restrictions in place for residents of Kildare, Laois and Offaly
2 Coronavirus in Ireland: Four more deaths and 98 new cases reported
3 Main points: What restrictions have been imposed on Kildare, Offaly and Laois?
4 Masks Q&A: Who has to wear them in shops and what happens if you don’t?
5 Warning of ‘economic meltdown’ in Kildare
Real news has value SUBSCRIBE