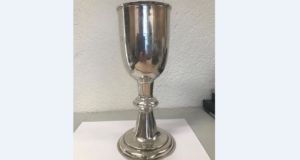 An 18th century chalice recovered by gardaí last week, more than two decades after its disappearance from Ardee in Co Louth, is worth around €10,000, an auctioneer of Irish collectibles and antiques has said.

The artefact, which was kept in a safe, was stolen during a burglary in 1998 in Ardee town. The safe was found empty later that year by gardaí in Tallaght. However, the authorities were alerted last week after the chalice appeared at an auction in Dublin.

The chalice was first brought to Ardee in 1764 after it was presented by Viscountess Margaretta Foster, the wife of Sir John Foster, Baron Oriel, the last speaker of the Irish House of Commons, to the local Ardee church, according to Ian Whyte, Managing Director of Whyte’s auctioneers.

The value and worth of the chalice would depend on where in the country it was made and whether it was created using religious or secular silver, Mr Whyte told The Irish Times.

While most silver that survives from the 18th century comes from churches and monasteries, a small number of secular pieces do exist, he said. The artist’s mark on the chalice increases the worth of the artefact while the exact year of its creation played a role in its worth.

In this case the 18th century artefact - mistakenly described by gardaí as 17th century - would be worth around €10,000, he said.

However, the sale of a porringer (porridge bowl) crafted in Dublin during the time of Oliver Cromwell at a 2016 UK auction for around €37,000 illustrates the high worth of a piece of secular silver.

“Secular silver would be very rare, especially from Cromwell’s period. Most silver that’s survived from that period would be held in churches and they didn’t sell their stuff. Sometimes when secular silver was passed on the next generation might not appreciate its worth and sell it on. Things often vanished or were melted down.”

Dublin was a common location for the crafting of chalices while items from Cork and Limerick were rare, said Mr Whyte, adding that if the chalice came from England, its worth would drop.

Stolen items turn up in auctioneers’ collections a couple of times a year, said Mr Whyte. He urged anyone who discovers a stolen piece of art to report it to gardaí as well as the London-based Art Loss Register which keeps a database of missing items.