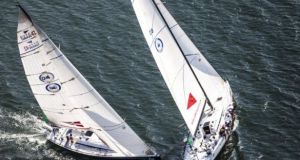 There will be a special race from Cowes to Crosshaven with the winner collecting a trophy donated by Prince Charles. File photograph: Rolex/Daniel Forster.

The 300th anniversary of the oldest yacht club in the world, located in Co Cork, is expected to attract thousands of visitors to its series of celebrations next year.

The Royal Cork Yacht Club in Crosshaven’s programme of events for Cork 300 launched at the weekend by Tánaiste Simon Coveney will feature a special race from Cowes to Crosshaven with the winner collecting a trophy donated by the Prince of Wales, Prince Charles.

Cork 300 chairman, Colin Moorehead recalled that the yacht club was founded in 1720 by “a group of 25 pioneering individuals” and the tri-centenary commemorations will include a celebration of “where it all began”.

“Sailing communities throughout Europe and as far as Australia, Hong Kong and San Francisco are expected to attend the Cork300 celebrations - which will take place primarily during the months of July and August 2020,” he said.

“And as part of the celebrations, communities across Cork harbour will host a vast array of sailing, racing, food and entertainment events, along with a number of talks, ensuring Cork will be the place to be in summer 2020.”

Mr Moorehead explained that the Cork300 summer celebrations, which will be preceded by several other events including European Maritime Day and Seafest in May, will centre on three main events in Cork Harbour

“We will have the great gathering of cruising yachtsmen and yachts from around the world in July, three championship weeks of competitive dinghy sailing in August, and the Club at Home Regatta for all fleets, also in August.”

Other highlights over the summer include a classic yacht regatta as well as the historic Kingstown/Queenstown feeder race from Dun Laoghaire to Cobh and the world-famous annual Volvo Cork Week Regatta.

The prestigious Morgan Cup, awarded by the Royal Ocean Racing Club will also come to Ireland for the first time as part of Cork 300 while the Royal Cork Fleet Review will feature “a fantastic parade of sailing craft in Cobh”.

“This is probably the most significant historic milestone that the Royal Cork Yacht Club and the sailing community worldwide will see in our lifetime, so it truly is an honour to be part of it and to share where it all began.”