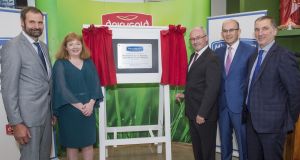 “Like Seán O’Rourke says ‘There were only two cheeses in Ireland in the 1960s, Galtee and Calvita’ and they were both made in Mitchelstown. ”

Historian and author John Hough is discussing the subject of his latest research, a history of Mitchelstown Co-Operative Agricultural Society Ltd which this year celebrates 100 years of existence.

Now operating under the Dairygold name following its merger with neighbouring co-op, Ballyclough in 1990, the Mitchelstown co-op owes its existence to the seed of the co-operative movement being planted in the area in 1895.

Mr Hough explained the co-op movement was founded by Count Horace Plunkett, who advocated farmers owning creameries and other businesses, thereby cutting out the middlemen and improving their returns.

In June 1895, a public meeting was held in Mitchelstown and among those to address it was Count Plunkett’s chief organiser, RA Anderson of the Irish Agricultural Organisation Society who outlined the advantages of co-operation.

The early decades of the 20th century saw huge political turmoil both in Ireland and internationally but in early 1919, the society sent their organiser, Patrick Courtney to advise the farmers of Mitchelstown on setting up a co-op.

“Mitchelstown began as a trading co-op – farmers had started coming together on an informal basis in 1918 to try and buy seeds at reasonable prices immediately after the war and it developed from that into a trading co-op.”

According to Mr Hough who has studied the full set of the co-op’s minute books from 1919 right up to 1990, the co-op proved hugely attractive for local farmers with some 400 joining within a short time of its establishment.

“They started buying milk about 1925 and that grew fairly quickly when they took over a privately owned creamery in the town and some 10 others in the surrounding area so by 1928, they were the largest creamery in the country.”

“The cheese business really began to expand in the 1930s under its second manager, former anti-Treaty Sinn Féin TD Eamon Roche, who had succeeded David Walsh and persuaded the members to invest hugely in equipment.”

Mitchelstown continued to expand and, consolidating during the second World War when milk yields fell. By 1950, were the second largest employer in the country after Guinness.

“Milk production continued to increase from the 1950s right up until the introduction of the quota system in 1984 which halted that growth but since the cap was lifted in 2015, milk yields are up 60per cent or so in the last four years.”

Launching Mr Hough’s history of Mitchelstown, Dairygold chief executive, Jim Woulfe noted how the Irish dairy and agri-industry had changed dramatically in the past 100 years and particularly in the last few years.

“We, in Dairygold, have always embraced and strived to capitalise on those changes for the betterment of our members and for the advancement of the society,” he told more than 200 guests invited to the centenary commemoration.

“And I believe with the prudent investments we’ve made in research, innovation and best-in-class dairy facilities, we will see this co-operative go from strength to strength as it enters its next century.”