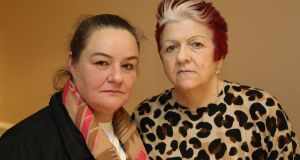 Women suffering health complications from vaginal mesh implants have called for an audit of the use of the devices in advance of a meeting with Minister for Health Simon Harris on Monday.

Mesh Survivors Ireland, which represents more than 500 women, is seeking greater access to treatment abroad and the creation of a specialist treatment centre in Ireland for women seeking to have the implants removed.

Mr Harris ordered a pause in the use of the devices in mid-2018 after controversy in Ireland and other countries over their use. The suspension is to remain in place until recommendations made by chief medical officer Dr Tony Holohan are fully implemented.

The group wants the suspension to remain in place until a retrospective audit is carried out. “They say only a minority of women are affected but they have no proof of this, as they’ve never counted how many have had implants,” said group member Lesley-Anne Stevens.

Sitting in the bar of a Dublin hotel, a group of 20 women describe in graphic terms the health problems they attribute to complications from mesh implants. They talk of “horrific” levels of pain, being unable to sit and therefore to live normal working and family lives, and of suffering from recurrent infections including sepsis.

Mary Dalton, from Cabra, has spent almost €50,000 and taken out three credit union loans to have her mesh implant surgically removed.

Ms Dalton was diagnosed with a prolapsed bowel in 2014, the late after-effect of an earlier hysterectomy. “The doctor said she would put mesh in that would lift up the bowel and it would solve the problem for good.”

Within months, she says she was suffering very bad vaginal pain and was unable to sit. She required repeated surgeries to clear abscesses and had to stay out of work.

Late last year, she went to England for a specialised translabial scan, which showed her mesh implant had broken into five parts that were protruding into internal organs. “The doctor told me the mesh had to come out or else I would end up in a wheelchair.”

Although the operation carried out by a private surgeon in the UK went well and she can now sit, there were complications and she has needed further surgery.

With pain a constant in her life and her movement severely restricted, Ms Dalton says she most misses playing a full role in the family. “I have two grandchildren but I can’t hold them or play with them.”

While internationally many women have had meshes implanted without problems, these women say they have debilitating complications as mesh has cut into organs or tissues or has broken up.

“It’s like a wool jumper that frays and frays, and then disperses through your body,” says Ms Stevens. Removal is not an easy task; one woman likens the process to “removing chewing gum from hair”.

Most had the mesh implanted to deal with mid-life complications of childbirth, such as pelvic prolapse and incontinence.

“But we were never told about the risks involved, only that it was the best thing since sliced bread and that it would change our lives,” says Ms Stevens, who says she suffered intense pain within weeks of receiving the implant in 2016.

The women’s experiences echo those affected by the CervicalCheck controversy, in that many say they were treated dismissively by doctors when they raised concerns.

Sceptical of the ability of Irish surgeons to completely remove the implants, some women have sought treatment abroad, both publicly and privately. “We don’t want to go to just any doctor who has not been properly trained to deal with this,” Stevens says.

The HSE said it has no plan to carry out an audit, and claims full and partial mesh removals are being carried out in the health system, though it was unable to produce a national list of surgeons doing this work.

Some who have applied under the HSE-funded Treatment Abroad Scheme to have their implants removed overseas have experienced opposition from their Irish consultant, whose approval is necessary for acceptance.

But even those who have been approved are experiencing delays, as the wait time for the scheme has grown to four months. Further delays are likely due to the numbers of private patients from Ireland seeking specialist help in the UK.

Terri Martin, from Co Waterford, was implanted with mesh in 2010 after being diagnosed with stress urinary incontinence. She says she has since suffered crushing pain, repeated bleeding episodes and prolonged fatigue as the mesh protruded internally. Her relationship has broken up and she moved house due to the resulting strain.

Last November, she had 10cm of the mesh removed, leaving the last and most difficult to remove 2cm section in her body. “The sooner this is out of me, the sooner I can get my life back on track.”

Sinn Féin health spokeswoman Louise O’Reilly, who will accompany the women to the meeting with Mr Harris, says the health service needs to provide full surgical removal services for the affected women. Medical cards should also be provided in acknowledgement of the lifelong health issues they have, she adds.

“Generally, these procedures were done in good faith, but had the women known more about the potential consequences they might have made a different choice,” says O’Reilly, adding that many of the women “were made to feel it was all in their head”.

The Department of Health says implementation of Dr Holohan’s recommendations is ongoing and funding is available within the HSE for a package of care for women with “urgent or immediate needs”.

“All surgical procedures involving medical devices such as mesh carry a risk of complications. However, mesh devices are certified as compliant with relevant EU legislation. European device regulatory competent authorities consider that the benefits outweigh the risks for these devices.”

The Minister has not ruled out further inquiries in this area, a spokeswoman said.

Two specialist scanners, which can identify mesh implanted in the body, are due to be commissioned soon, one in Dublin and one in Cork.