Woman (24) died on Christmas Day one week after giving birth 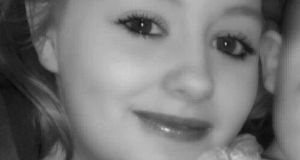 Within two days of giving birth, Karen McEvoy was complaining of severe back and abdominal pain, exhaustion, flu-like symptoms and sweating.

Karen McEvoy (24), originally from Tallaght in Dublin, died of suspected sepsis on Christmas Day, a week after she had given birth in the Coombe hospital. It had been a normal, vaginal, at-term birth of a baby girl, and Ms McEvoy’s third baby. She and Barry Kelly (26), her partner of six years, had two boys at home, aged one and three.

Within two days she was complaining of severe back and abdominal pain, exhaustion, flu-like symptoms and sweating.

Mr Kelly says before Ms McEvoy was discharged from the Coombe on December 19th, blood samples were taken but no further action was taken during a postnatal appointment at the Vista primary care clinic in Naas on December 21st or during a visit to the Coombe on December 23rd for their daughter’s heel-prick test. By this stage she was in such pain she needed crutches to walk, continued to experience flu-like symptoms, was sweating, and had worsening back and abdominal pain.

“Nobody asked Karen anything about why she was on crutches. I said while we were there we’d go to the A&E. So we walked over, very, very slow to the A&E. We sat down. Karen went and did a urine. She was in there a long time. She got called in to a room and was only in there a few minutes,” he said.

He said she was told she may have sciatica, “and they told us: ‘If it gets worse go to Tallaght [Hospital] for an X-ray’."

On December 24th, Ms McEvoy remained unwell. There was no improvement in her symptoms, but she and Mr Kelly had been reassured by their visit at the Coombe the day before.

When she woke on Christmas morning, she was “swollen, her arms, her legs, her face. She couldn’t speak properly, slurring her words, breathing heavy,” Mr Kelly said.

“Her pupils were the size of pen tips. She was hot, sweating and in pain. She couldn’t let anyone touch her. I called my mother and said: ‘You have to call an ambulance’.”

They arrived at Naas hospital about noon and she was brought into a room off the emergency department. She was put on broad-spectrum antibiotics.

He went in to see her several times as she was being treated and at one stage, he says, she told him she was “septic”.

“I had no idea what septic was. My only thought was Karen. The doctors said they were giving her antibiotics. They said the signs were pointing towards sepsis.” He was advised of their plan to “put Karen asleep” and intubate her to help her breathe.

“I went into her and she said: ‘Were you crying?’ and I said: ‘Yes, I’m worried about you. You’re my darling.’ I told her I loved her, and I would forever and ever, no matter what, and she said the same to me. And I said: ‘I am right outside. I’ll be here when you wake up'.”

During attempts to intubate her, however, Ms McEvoy went into cardiac arrest. Despite a trauma team working on her for 40 minutes, she died in the emergency department.

“I went into her and I was talking to her. I was like: ‘I love you. You can’t leave me. We have to build our house. We have to get married in 2025.' I just kept calling her. I can still hear the sounds of the compression pump on her chest, and all I wanted was to hear the beep, but it was just a flatline.

“I held her hand. They’d done everything they could in Naas. They were brilliant. It was very hard for them too.”

When Ms McEvoy’s body was brought home the family was advised not to touch her for fear there could be infectious pathogens, he said. Her funeral took place on December 29th, at Church of Our Lady of Mercy in Cross Chapel, Blessington, near the home she had made with Mr Kelly and their children.

Mr Kelly has had to take leave from his work in IT. “I have to be mammy and daddy now. I had to tell them she was gone in a way they could grasp. I told them mum was so special and so amazing that the fairies came and got her, to give her her fairy wings. I said: ‘When mammy comes home she’ll be in a magic fairy box and we can’t touch her’."

He says the master of the Coombe, Sharon Sheehan, called him a few days after Ms McEvoy’s death telling him there would be a full investigation and he would be welcome to have an input to it. “I haven’t heard anything more from anybody. I don’t really want to talk to them.

“It’s a month on and I still don’t know what happened, what wasn’t done that should have been, what wasn’t checked.”

Speaking about that last week of her life “is really hard”, he said. “But I have to do this for Karen. Her shoes are my shoes. No matter what I do or say I can never bring Karen back.

“I have to get answers for my kids. They are not going to believe in fairies forever. I have to be able to tell them: ‘This is what happened to your mum’.”

Though he understands the Coombe is carrying out its own inquiries into Ms McEvoy’s death, Mr Kelly wants an independent investigation.

His solicitor, Niamh O’Brien of O’Brien Murphy solicitors, said Mr Kelly was “demanding an immediate independent investigation into the events that led to the tragic death of Karen”.

“We require sight of the medical records as a matter of priority given the tragic circumstances surrounding Karen’s death,” she added.

A spokeswoman for the Health Service Executive, on behalf of the Coombe, Naas General Hospital, and the Vista primary care clinic, said: “The HSE cannot comment on individual cases. Maintaining a patient’s confidentiality is not only an ethical requirement for the HSE and all HSE-funded hospitals, it is also a legal requirement.”

Kildare county coroner Dr Denis Cusack has been informed of the death.