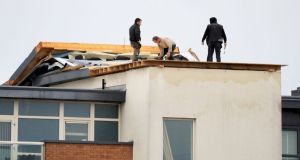 An expert report has revealed “fundamental” balcony design flaws at a boom era housing development in Dublin and a second report has raised fire safety concerns.

Construction of the balconies at Belmayne housing development, off the Malahide Road north of the city, was found to be “sub-standard throughout, in particular at flashings, timberwork and rainwater outlets”, one report found.

It said inspections of sample balconies at the 1,000 unit development “suggest a fundamental flaw with the design and construction of the original balcony”.

One of the unpublished reports, seen by The Irish Times was carried out by CS Consulting on behalf of Emerley 59, a property company which owns several properties at the development.

The consulting firm also raised concerns about bay windows in the developments. While it could not inspect any of these features, it did warn that these windows had a greater “dead load”, and “any deterioration of the timber elements to the degree witnessed at the balconies would have serious consequences”.

One of the blocks at the project is managed by Clúid, the housing charity. Brendan Cunningham, head of investment planning with the organisation, said it had taken a “proactive approach” when it was discovered that the balcony railings were not properly anchored down, causing timber holding the railings to rot.

Clúid began to take over ownership of empty units from 2010, and now owns and manages 236 tenancies. It has encountered multiple problems since then.

During Storm Ali last September, residents living in one apartment block, now owned by Clúid, heard a loud bang around 11am. Half of the roof had come loose in the storm force winds, and folded back over on itself.

A subsequent inspection by an engineer hired by Clúid found there had been inadequate strappings between the roof and the wall during construction.

The section of the roof covered the stairwell in the centre of the apartment block and water poured down through the building, ruining carpets in common areas, and causing leaks in several apartments. Tenants were evacuated, and put up in hotels or stayed with family or friends for close to a week, while Clúid sought to replace the roof.

Three families who lived on the top floor were unable to return to their apartments for over three months due to repairs, returning only in late December.

Mr Cunningham said the roof failing was a result of “poor quality workmanship” during construction. The estimate cost of repairs could be as high as €150,000, he said. Clúid has already spent €300,000 on repairs addressing past construction failings.

Last October, a 16ft long canopy ledge came loose and fell from the third floor of a separate apartment block, crashing onto the footpath below. The apartment block is managed by Keenan Property Management (KPM), but houses several Clúid tenants.

One Clúid tenant in the building told The Irish Times he had alerted the social housing agency and KPM that the metal and wood ledge was coming loose from the wall, several hours before it gave way.

While Clúid do not manage that apartment block, its on-site office is located on the ground floor, in front of where the ledge fell.

“On inspection of what happened there, it looks like the timber within that canopy had rotted, deteriorated, it was always going to give in,” Mr Cunningham said.

The housing body has inspected similar canopy ledges in its own apartment buildings, but it appears different fixings were used during construction. “Are we 100 per cent certain there won’t be more issues? No, we’re not. However, if we uncover them, we will address them,” Mr Cunningham said.

A second report was written following a visual inspection of fire safety compliance features by McCartney Smyth Fire and Safety Consulting in September of 2017.

It suggests that in some instances, flammable material was used alongside seemingly inadequate fire-stopping work. One service riser inspected “does not appear to be adequately constructed to achieve the required fire resistance for the walls and it looks like flammable expandable foam was also used”, according to the report.

A section on fire doors found an example where a “gap between the fire door and the masonry construction . . . has been filled with flammable expandable foam instead of fire-stopping material”.

Another photo of a fire door shows “the gap between the fire door frame and the fire-resisting construction which has not been filled at all”.

The development was launched in 2006 promising “gorgeous living”, but it has encountered several fire safety and building standard issues since it was launched. In 2012, fire safety issues were found during repair works to a burst water main.

The original developer, Kitara Limited, funded repairs at its own cost to 225 homes where issues were identified. It is still in mediation talks with several property owners and in consultation with authorities. Questions posed by The Irish Times to KPM were not responded to. The original contractor on Belmayne has ceased trading and is in receivership.

A spokesman for Emerley 59 confirmed it had received the CS Consulting report and repaired balconies that had been damaged as a result of water ingress caused by the flaws. It said the original consulting firm had inspected the repairs and confirmed they were to a good standard.

A second report commissioned by Emerley focused on the cantilever system, a structural element of the balconies distinct from the timber elements which were found to be flawed in the earlier report. It found that the cantilever was correctly constructed.