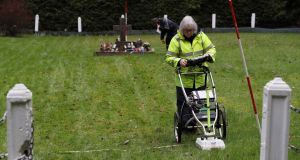 A geophysical survey of infant burial grounds at the site of the former Sean Ross Abbey mother and baby home in Roscrea. Photograph: Brian Lawless/PA

The Mother and Baby Homes Commission has begun a geophysical survey at the site of a former mother and baby home in Tipperary.

The survey is being carried out on burial grounds in Roscrea associated with the former Sean Ross Abbey institution.

Sean Ross Abbey was run by the Sisters of the Sacred Hearts of Jesus as a mother and baby home from 1930 to 1970.*

It has been reported that the remains of young women and babies are buried in unmarked graves on its grounds.

Minister for Children Katherine Zappone confirmed the plans after the Cabinet granted a one-year extension to the commission to publish its final report, which was due to be finished next month. It will now be due in February 2020.

The Minister published the Fourth Interim Report from the Commission of Investigation into Mother and Baby Homes on Wednesday.

Speaking after the Government meeting, Ms Zappone said: “I know this is not the news which survivors and their families wanted to hear.

“I know they will be disappointed by this development but the commission is confident that with this additional time it can comprehensively report on its terms of reference.”

The mother-and-baby home at Sean Ross Abbey was where Philomena Lee – whose story was the basis for the book and film Philomena – gave birth to her son. He was adopted by a couple from the US and raised there. – PA

Election 2020: Sinn Féin wants new 5% tax on people earning over €140,000 00:05
Housing the dominant issue in seven-way general election debate 23:55
‘There’s so much change that people want and that they didn’t get’ – Zappone 23:45
Brexit: Michel Barnier says EU ‘will not turn its back’ on North 21:48
Fine Gael pledges four further technological universities 21:35