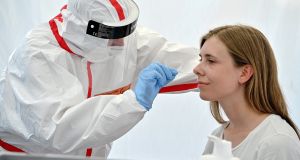 A traveller gets a swab sample collected at a Covid-19 walk-in test centre at the Cologne Bonn Airport in Cologne: travellers have to take the test and quarantine is a legal requirement until they get a negative result. Photograph: EPA/Sascha Steinbach

Once again, the testing regime in place for Covid-19 is under scrutiny.

Families with children attending a creche closed by an outbreak in Co Meath say they have been waiting a week for results. Meat factories have brought in private labs to process tests performed on staff in order to speed up the delivery of results. The Irish Times is anecdotally aware of several cases where people say they have been four days waiting for results.

Asked last week about the performance of its testing system, the HSE said the median time for all its tests from swab to result was one day.

The median “end to end” turnaround time for testing and contact tracing was 1.8 days, a spokesman told The Irish Times.

On the face of these official figures, the system is performing solidly though not spectacularly. But do the figures tell the whole story?

The figures are an aggregate of the median times for community and hospital lab testing. Healthcare workers and hospital patients generally have their tests processed in hospital labs. These are completed faster because they are for the most part located nearby and use systems that have been in place long before this crisis erupted.

In contrast, testing in the community follows a procedure put in place in a time of crisis, with a large number of intermediate steps. This process takes longer; 23 hours on average, compared to 16 hours for hospital labs, according to the most up- to- date figures from the HSE’s performance dashboard.

But this overall figure for the performance of community testing is an average so, inevitably, there are outliers where it takes longer for results to come back. Last month, according to National Public Health Emergency Team correspondence, 90 per cent of tests were being completed within three days.

This begs the questions of what “completed” means, and what happens with the other 10 per cent of cases? How long do they have to wait?

It is hard to judge, because the publicly available information is scanty. The same HSE dashboard puts the mean time for tracing all contacts of a case at 1.3 days currently, and estimates the average number of contacts per case at six.

There are also delays at the start and end of the process, caused by people waiting before seeking advice about their symptoms and by delays in relaying the results of lab tests to those affected.

If there is a real problem, it is not caused by bandwith issues. Earlier this year, at the height of the crisis, the system could not cope with the volume of people requiring a test, even when the test criteria were narrowed artificially to lessen some of the strain. Samples had to be sent to Germany for testing because the Irish system lacked capacity.

That, we are told, is no longer the case and it is certainly true the 100,000 tests-a-week capacity has never been used.

In mid-June, just 18,000 tests a week were being performed, rising to 50,000 in mid-July as serial testing of staff in nursing homes and other residential care facilities was undertaken. The figure has tailed off since and at the end of July just 27,000 tests were being conducted – one-quarter of available capacity.

It is hard to understand why we are not using the capacity that is there for wider testing, particularly given the increased awareness of the role of asymptomatic transmission of Covid-19.

Demand for testing will now increase in coming weeks thanks to the crisis in the meat processing industry and the decision to begin serial testing there and in direct provision centres and, once again, in nursing homes.

On Tuesday, the talk was of moving away from a New Zealand-style elimination strategy and toward Germany’s “business as usual” approach. But if the Government is serious about this change it will have to replicate Germany’s success in rolling out massive and widespread testing.

In Germany, private as well as public labs were encouraged to develop capacity early on and, today, free tests are being offered to holidaymakers arriving home from Covid-19 “hotspots”. This is being done to benefit public health even though ministers acknowledge the travellers should be paying for the test themselves.

But with the carrot comes the stick; travellers have to take the test and quarantine is a legal requirement until they get a negative result.