Ireland capable of achieving zero Covid cases by the end of the year, says scientist 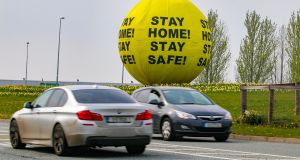 Some 118 of the new cases announced on Saturday are linked to the three counties – Kildare, Laois and Offaly – where restrictions on movement were reintroduced at midnight following a virus surge there. Photograph: Crispin Rodwell/The Irish Times

Financial support may be offered to businesses in Kildare, Laois and Offaly forced to close under the latest restrictions, the Minister for Agriculture has said.

Dara Calleary said the Government should consider a “specific package” to assist businesses and people in the three midlands communities who have been forced to close their doors because of the resurgence of Covid-19 cases in their counties.

Mr Calleary told RTÉ’s This Week programme he was conscious that the restrictions were “incredibly difficult” on communities and that he planned to discuss with Government colleagues what level of supports would be needed.

The goal is to avoid further community transition through increased testing across the three counties, he said.

Speaking on the same programme, professor Philip Nolan, chair of the Nationall Public Health Emergency Team, said he was very concerned by the rise in coronavirus cases and underlined that 777 cases had been reported over the past fortnight, a five fold increase on the previous two weeks.

Of these 777 cases, 419 were in Kildare, Laois and Offaly, he said. “A short, sharp intervention now could save us a great deal of difficulty in two or three weeks time,” he said, adding that it was “almost inevitable” that a small level of community transmission would have already occurred in the three counties.

The Government’s decision to reimpose restrictions in certain parts of the country was “exactly the right thing to do”, said Prof Nolan. Had these not been introduced, the opening of schools and universities would “almost certainly have been threatened”.

Head of the HSE Paul Reid said the executive had “taken learnings” from the mistakes it made early in the pandemic and was “reflecting” on previous actions when moving forward. “We have done a mighty job across the country in terms of the public support, the public engagement and the public coordination in terms of where we are with the virus,” he said.

Asked to comment on the HSE’s decision to spend €100 million per month for the use of private hospitals, Mr Reid said they had done right thing at the right time based on the crisis unfolding in Italian and Spanish hospitals. “The country was scared, every hospital system in Europe was overwhelmed. We needed capacity because we operate at 95 per cent capacity every day.”

Negotiations with private hospital groups are now focused on creating a healthcare model that is “more agile” and that may be county specific, he said.

Professor Anthony Staines, professor of health systems at Dublin City University, told RTÉ’s Brendan O’Connor show that Ireland was capable of achieving zero cases of Covid-19 and stopping the domestic circulation of the virus by the end of the year.

Prof Staines called on the Government to move away from its strategy of living with the virus and instead focus on reducing cases to zero. This can be done through proper use of masks, hand-washing, social distancing and significantly more testing, he said.

Prof Staines is one of a group of leading Irish scientists who warned last week that there is a “small and narrowing” window to bring Covid-19 cases to zero.

He also suggested more stringent controls in airports, including testing before and after travelling, to prevent the disease spreading through international travel.

“We have a pretend system which pretends to track you and pretends that you’re isolating and actually does nothing about it effectively,” he said. “Maybe if we take €1,000 off your credit card and if you’re not where you say you are we keep that.”

People should be wearing masks “practically everywhere indoors”, he said, adding that he wears a mask before he starts eating in a restaurant and replaces it as soon as he has finished his meal.

The DCU professor warned that the HSE was facing into its worst ever winter given the “huge queue” of people waiting for treatment for diseases unrelated to Covid-19 and said there should be no non-essential travel across county borders in order to reduce the number of cases.

He also warned that the continued housing of people in direct provision centres, and the construction of shared living spaces across in Dublin in response to the housing crisis, would only further exacerbate the spread of the virus, warning that shared living centres were “potential disaster areas”.

The Irish public health system is designed to deal with disease outbreaks and has the training to respond to a crisis like Covid-19, said Prof Staines, who underlined that there are professionals working in Irish hospitals who have dealt with cholera epidemics “on a continental scale” in other countries.

Minister for Health Stephen Donnelly tweeted on Sunday morning that his department was “preparing options for Government on how to restrict non-essential travel from third countries (outside EU/UK) with high rates of Covid”.

Mr Donnelly said he was “concerned about high rates in some places” and that options would be “finalised as soon as possible”.

“While travel related cases here remain small, some countries are seeing a rapid rise in cases so the risk is increasing,” he tweeted. “Once proposals are finalised they will be presented to Gov for discussion.”

There were 174 new cases of coronavirus and one death due to Covid-19 reported by the Health Protection Surveillance Centre on Saturday. This brings to 1,772 the total number of Covid-19 related deaths in Ireland. The number of confirmed cases now stands at 26,644.

The figure for new cases reported on Saturday was the highest one-day total since the middle of May and up from the 98 reported on Friday.

Acting chief medical officer Dr Ronan Glynn said the sharp increase in coronavirus cases reported on Saturday was not unexpected and that significant numbers of infections are likely to be identified over the coming days.

Dr Glynn said 118 of the new cases are linked to the three counties – Kildare, Laois and Offaly – where restrictions on movement were reintroduced at midnight following a virus surge there.

Dr Glynn said testing was being carried out on hundreds and hundreds of employees and close contacts of people confirmed as having the virus in one of a series of clusters in factories in these three counties.

However, he sounded a note of caution for the rest of the country and appealed to people to be cautious and heed the public health advice.

Over the past 14 days, several hundred cases of Covid-19 have emerged in these three counties representing about half of all cases detected in the State during that time.

Most of the cases are linked to food-processing plants in the region, with two factories having more than 80 cases.

Gardaí will police the new regional travel restrictions in the same way as they approached the national lockdown earlier this year, with checkpoints and requests to return home where people are found to be in breach of the regulations.