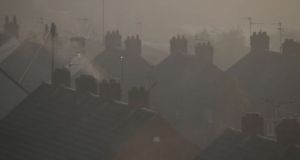 Scientists have found that air pollution in the winter is associated with more hospitalisations in Dublin due to strokes. File photograph: Getty

Scientists have found that air pollution in the winter is associated with more hospitalisations in Dublin due to strokes.

The study, led by researchers from RCSI University of Medicine and Health Sciences, has prompted a call for a national ban of solid fuel burning.

During winter months in Ireland, particularly in Dublin, higher levels of particulate matter (known as PM2.5 and PM10), coarse particles, sulphur dioxide and nitrogen dioxide are found in the air. The sources of these are solid fuel burning, such as coal, peat, and wood, as well as road traffic – especially diesel engines.

After accounting for other factors, such as temperature, humidity, day of the week and time, the researchers found there was “a statistically significant rise in the number of hospitalisations for strokes in Dublin zero to two days after a rise in air pollution”.

The study published in the latest issue of the journal Cerebrovascular Diseases marks the first time there has been a link demonstrated between short-term air pollution and stroke in Ireland.

“Every year, more than 10,000 people in Ireland have a stroke. Our research adds evidence that there needs to be a national ban on solid fuel burning to help in our efforts to reduce this number,” said Dr Colm Byrne, the study’s lead author, who is based in the RCSI Department of Geriatric and Stroke Medicine.

“Because Ireland has relatively low air pollution when compared internationally, this highlights the need to introduce additional policy changes to reduce air pollution in all countries,” said Prof David Williams, professor of stroke medicine at RCSI.

The research was carried out by Dr Byrne; Prof Kathleen Bennett, Prof Anne Hickey and Prof David Williams at RCSI in collaboration with Dr Paul Kavanagh from the HSE Health Intelligence Unit and Prof Brian Broderick and Prof Margaret O’Mahony from TCD Department of Environmental Engineering .