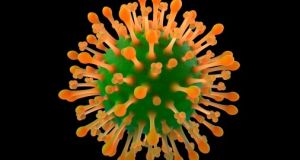 Irish doctors have been urged to be on the lookout for cases of a paralysing, polio-like condition that has affected hundreds of children in the US.

The Health Service Executive (HSE) says following an increase in acute flaccid paralysis (AFP) in children in the US, any case of a child with similar symptoms should be notified to the Health Protection Surveillance Centre (HPSC) in Dublin.

Symptoms of AFP include sudden onset weakness and loss of muscle tone in the arms and legs, facial and eyelid droop, difficulty swallowing and slurred speech.

So far this year, two cases of the condition have been reported to the HPSC, it says.

Ireland collects data on AFP as part of worldwide polio eradication efforts, so that polio can be ruled out as a possible cause. Ireland has not had a case of polio since 1984, and 95 per cent of children are vaccinated against the disease.

Although different infections – viruses and bacteria – can cause AFP, initial investigations suggest some of the cases are caused by enteroviruses, according to the HPSC. None of the US cases involved the polio virus.

However, in the US, almost 400 cases of acute flaccid myelitis – when paralysis is accompanied by damage to the spinal cord – have been confirmed over the past four years. So far this year, 62 confirmed cases have been reported across 22 states, twice as many as in the whole of 2017.

The HPSC says it is raising awareness of this increase by alerting the National Polio Elimination committee, the National Virus Reference Laboratory, public health departments and nominated contact points in the three paediatric hospitals, as well as via social media.

Dr Brian Lynch, a paediatric neurologist in Temple Street University Children’s Hospital, said he has come across two cases where the clinical symptoms matched that of AFM, but there was no sign of the enterovirus which is the suspected cause.

Enteroviruses are common infections that are present in most people and associated with common cold-like symptoms. However, in some people they present a greater threat.

Dr Lynch said the prognosis for affected patients was variable, with some making a good recovery and others suffering lasting neurological impairment.

The US Centers for Disease Control, which has been studying AFM since 2014, points out that even with the surge seen in recent years, the illness is very rare, affecting only one in a million Americans. It says the cause of most cases remains unknown, as does the reason for the rise in cases over this time. The long-term effects of AFM are also unknown. Some patients have recovered quickly, while some continue to have paralysis and require ongoing care.

Dr Lynch said parents confronted with rapid onset symptoms in a child such as a loss of muscle power should seek medical attention promptly.