Contraband intended predominantly for use when teeth whitening and skin bleaching

With cases up by 300% in the UK in the last 5 years, The Avoca Clinic introduces cosmetic gynaecology procedures aimed at women with post childbirth and abnormalities from birth 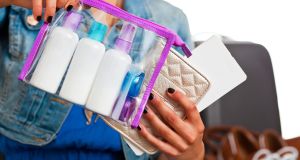 Reported adverse affects from illegal cosmetic products in Ireland are increasing, according to the regulatory authority. File photograph: Getty Images

More than 3,000 harmful illegal cosmetic products were seized as they entered Ireland in the past two years.

They were, in the main, for teeth whitening and skin bleaching. Some 1,100 banned cosmetic products were confiscated in 2017 while almost 2,000 were held back in 2016, data from the Health Products Regulatory Authority (HPRA) shows.

Illegal cosmetic products can contain highly toxic substances, such as arsenic and lead. These are deemed extremely harmful to health.

Across the European Union such products are removed from the market on an ongoing basis. A French baby lotion product was recently withdrawn as it was deemed a “serious risk” to infants. The product contained Methylchloroisothiazolinone and Methylisothiazolinone, preservatives which can trigger allergic contact dermatitis in sensitised people.

Reported adverse affects from illegal cosmetic products in Ireland are increasing, according to the regulatory authority. Last year, the watchdog which regulates cosmetic products, recorded 21 vigilance cases compared to 13 in 2016 and 11 in 2015. “This activity includes distributors and retailers in Ireland that are selling cosmetics online. Suspect cosmetics are investigated from a public health perspective by the HPRA and action is taken to withdraw those that are considered unsafe,” said an authority spokeswoman.

If a consumer experiences an undesirable or serious undesirable effect after using a cosmetic, the investigation is recorded as a vigilance case. Where a cosmetic is considered non-compliant with cosmetics regulation because, for example, it is incorrectly labelled or contains a prohibited ingredient, the investigation is recorded as a compliance case. There were 189 such cases in Ireland last year compared to 163 in 2016.

Last year, 21 products were removed from the Irish marketplace, while eight were eliminated in 2016.

Illegal teeth whitening products often contain high levels of hydrogen peroxide. This can cause skin irritation and is harmful if swallowed.

He advised that products obtained online from outside the EU were the “worrying ones”. And he said that while skin bleaching products were prohibited in Ireland, they were widely available in countries like Singapore and India.

Separate to cosmetic products, the foundation commonly deals with the abuse of prescription creams for skin conditions such as eczema and psoriasis.

“Commonly, we hear of miracle natural creams that when tested are in fact full of potent steroids and could damage the skin,” he said.

The abuse of prescription creams is something the foundation is alerted to three to four times a year, he added.

Individuals are also experimenting with illegal tanning drug Melanotan. Several cases have been reported in Sligo and Dublin recently. An Irish study highlighted last year indicated that 2 per cent of teenagers had used Melanotan.

From a dermatology perspective it not only increases tanning but also changes the pathology features of moles, making it very difficult to detect potential cancer.