Cost of cervical screening tribunal will be ‘significant’ – Harris 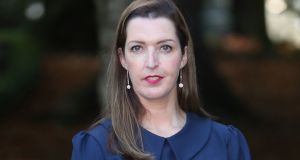 Vicky Phelan has urged Simon Harris to provide assurances on how the adversarial nature of the proposals could be minimised. Photograph: Niall Carson/ PA Wire

The cost of establishing and operating the proposed new tribunal for dealing with the cases of women affected by the cervical screening controversy will be “significant”, Minister for Health Simon Harris has warned fellow Ministers.

There are currently 72 active cases where legal proceedings related to the CervicalCheck programme have been initiated, Mr Harris has told the Cabinet in a confidential memorandum. Another five potential cases are pending while one has been closed.

Cabinet on Tuesday discussed a report by Mr Justice Charles Meenan proposing the setting up of a tribunal to hear and determine claims arising from the CervicalCheck controversy. Mr Harris will present formal proposals based on his recommendations in a month’s time, taking account of cost issues, following consultation with other departments and the women involved.

Mr Justice Meenan had been tasked by the Minister with devising an alternative to the courts system for dealing with claims arising out of CervicalCheck. His proposal provides for hearings to be held in private, in a less formal environment than a court process. Participation would be voluntary.

A right of appeal to the High Court would remain and a fast-track mechanism would apply where liability was not being contested. Parties would be entitled to legal representation, so plaintiffs would be subject to cross-examination.

The report elicited a sceptical response from Cian O’Carroll, the solicitor representing many of the women, who likened the proposed tribunal to “the High Court with closed doors”.

Holding proceedings in private would encourage defendants (likely to be the testing laboratories and/or the HSE) to cross-examine women more aggressively than they would in open court, he predicted.

“The media focus has been crucial in this up to now. My preference would be to deal with cases in the public courtroom, but to give plaintiffs the protection of anonymity.”

Vicky Phelan, the terminally ill Limerick woman whose High Court settlement in April first revealed the issues with the CervicalCheck programme, urged Mr Harris to provide assurances on how the adversarial nature of the proposals could be minimised.

Mr Justice Meenan has suggested the tribunal model proposed in his report could be applied to deal with other medical negligence claims. Government sources said they were “open-minded” about the suggestion.

Mr Harris commissioned the report in response to controversy over the screening programme after Ms Phelan, who has cervical cancer, settled a High Court action in April over the reading of her smear test.

It later emerged that more than 200 women were not informed of an audit which revised their earlier, negative smear tests.

Mr Justice Meenan said there were two issues involved: allegations that the smear tests had been negligently read; and a failure to disclose to the women the results of audits carried out on the smear tests, after their cancer was diagnosed.

There were serious issues on liability on the reading of the smears, he said. A significant number of smears will be reported as showing no abnormalities “despite there being possible abnormalities present”.

“This does not, of itself, amount to negligence on the part of the person(s) reading the smear,” he pointed out.

Issues of liability on non-disclosure of audit results “may legally be of a less contentious nature”, the report states.

Given the issues on liability, a redress scheme based on no-fault liability was not appropriate, according to Mr Justice Meenan.

Legislation would be required to set up the tribunal, which would be chaired by a serving or retired judge of the higher courts. Parties would be entitled to legal representation and would be limited to calling one expert witness only.