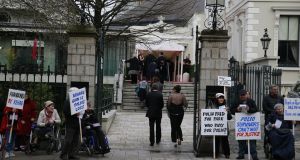 Justice for Polio Survivors lobby guests as they gathered for this years People of the Year Awards in the Mansion House on Monday. Photograph: Nick Bradshaw

A group of polio survivors has threatened a lengthy “campaign of protest” against the Rehab disability organisation in a continuing row over financial support.

The Justice for Polio Survivors group claims Rehab has contributed relatively little to polio supports compared to what had been raised through fundraising over the years and from its acquisition of Park House in Stillorgan.

Rehab gained use of Park House when it merged with the Polio Fellowship of Ireland (PFI) in the 1980s. Company accounts for 2016 show PFI had assets of €4.5 million, eight staff and was mainly engaged in day care.

The group says Rehab provided annual funding averaging €32,000 for post-polio supports between 2000 and 2014, but funding was then stopped.

“Rehab has had all the benefits of this merger but is not prepared to meet the responsibilities that go with these benefits,” Susan Dowling, a co-ordinator of Polio Survivors Ireland told a press conference in Dublin on Tuesday. Polio survivors were the victims of a “serious moral and ethical injustice”, she claimed.

Rehab said it provided grants totalling €583,000 to the polio group between 2000 and 2015 with money from the Charitable Lottery Fund. However, when the fund ended, it was no longer able to provide funding.

“The cessation of the fund had a significant impact on Rehab’s funding stream and as financial sustainability is a key pillar of our long-term strategic plan, we could no longer continue to make these donations.”

A spokeswoman said Rehab had no legal obligation to provide funding to Polio Survivors Ireland. “We believe it would be inappropriate for us to use our funding to grant aid another charity.”

Polio, a crippling and potentially fatal disease, was once common in Ireland but has all but disappeared since the introduction of a vaccine in the 1950s. It is estimated there are 7,000 polio survivors living with the disease in Ireland.

Many survivors are now suffering from post-polio syndrome, involving chronic fatigue and pain.