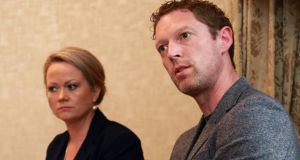 Taoiseach Leo Varadkar and Minister for Health Simon Harris have met cervical cancer campaigners about a formal State apology to the women and families affected by the CervicalCheck controversy.

Mr Varadkar is expected to make a formal apology in the Dáil when it resumes in the autumn. He is expected to use a form of words that will not be prejudicial to the taxpayer but that fully acknowledges the experience of the women affected and the State’s poor handling of the matter.

Lorraine Walsh, whose test results were misdiagnosed, and Stephen Teap, whose wife Irene Teap died of cervical cancer, represent the 221+ patient group and discussed all aspects of the State’s role in the CervicalCheck controversy with Mr Varadkar and Mr Harris.

The controversy erupted over a year over non-disclosure to more than 220 women diagnosed with cervical cancer.

In a statement following the 90 minutes meeting, the 221+ group said that “a full apology is only possible with a full understanding of what one was and is responsible for.

“Today’s meeting is the beginning of a new dialogue which is now more properly and fully informed in that regard by the work of people like Dr Gabriel Scally and, more recently, Prof Brian MacCraith which uncovered the shortcomings that led to this catastrophic systems failure,” it said.

“Our objective for an apology is that it begins a healing process for all those impacted negatively by CervicalCheck. Today’s discussions embraced that principle and were approached in a positive and constructive manner which we hope will now move to a public conclusion in a timely manner.”

In an interview on RTÉ radio, Mr Varadkar said he thought an apology had already been made to all the women affected by the controversy but he was willing to make a formal apology if needed.

It is understood that a number of women involved were very angry that they never got an apology from the person they dealt with.

They are believed to accept that this was not directly linked to the Taoiseach or Mr Harris but in the wake of the Scally report on failings in the system, re-iterated in the MacCraith review, there is now an expectation that the State will acknowledge its responsibility for the repeated failings of the system.

During the meeting Mr Varadkar and Mr Harris thanked Ms Walsh and Mr Teap for their “extraordinary dedication to ensuring that the full facts about what happened in CervicalCheck is established, lessons learned, changes made and trust restored”.

The Taoiseach added that “the meeting was an opportunity to review recent progress made” and also developments including the rapid review report by Prof MacCraith.

The report was commissioned by the HSE following a “major miscommunications failure” affecting 4,088 women who faced delays of more than six months in getting smear test results.

A combination of non-integrated IT systems between US-based laboratory Quest Diagnostics and CervicalCheck in Dublin and “human error” meant that 873 women and their GPs did not receive test results while in 3,215 cases the GPs were informed but not the women concerned.

Mr Harris described the discussion as a “ good and constructive engagement”. They discussed a number of issues but he did not want to breach the privacy of the meeting.

He added that there would be “further engagement with patient representatives in advance of that apology in the Dáil autumn term”. He also paid tribute to HSE director general Paul Reid for “the leadership he showed” in dealing with the MacCraith report.

Mr Reid apologised to the women affected by the delays and said he wanted to develop a culture of “putting women first”.

The Minister said it was important when such failures arose to acknowledge them, accept responsibility, put processes in place and to act on them.